State of the State: Enduring brand brings decades of flavor, with Colorado as no. 1 market.

Green chile has become synonymous with Colorado food, whether those chiles come from a fragrant roaster drum off Federal Boulevard, frozen after harvest for enjoying later, or from a bottle plucked off the grocery rack. When it comes to green chile sauces and salsas, few brands have endured longer and sold more than the one with the Albuquerque area code and Hatch stamp of approval: 505 Southwestern.

The company is celebrating 25 years of delivering green chile flavor while supporting thousands of farmers and other workers from Denver to New Mexico’s Rio Grande Valley and beyond. While the New Mexico village of Hatch is the self-proclaimed “chile capital of the world,” 505 Southwestern has been headquartered in Greenwood Village since 2015 and touts Colorado as its No. 1 market.

“We love all things green chile,” says Rob Holland, 505 Southwestern’s executive chairman. “We’re a Colorado-based company, so we’ll always give a big shout out to our friends in Pueblo who grow great peppers.” 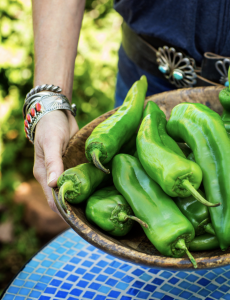 The debate over who grows the best chiles—Pueblo or Hatch – has spawned a mostly friendly interstate rivalry that has probably benefited both locales. On the merits of also sourcing from Hatch, Holland explains, “The New Mexico growing season is slightly longer, and the farmers down there have been great partners of ours for over 20 years.”

Holland leads operations out of Denver and manufactures in New Mexico with more than a dozen varieties of sauces, salsas, quesos and chips. The company managed to keep shelves stocked throughout the pandemic, and the product is now available at Colorado Rockies and Denver Broncos games, thanks to recent partnerships.

“505 Southwestern now has four facilities and farmland in Colorado and New Mexico to support the growing, roasting, jarring and distribution of our green chile,” Holland says. “We are very unique in our true, farm-to-table infrastructure.”