Banksy — the world-renowned, renegade graffiti artist from the UK — can be witnessed in a rare collection of multimedia at the Denver Sports Castle (1000 South Broadway, Denver). The Art of Banksy exhibit opened doors on April 14 and will run through June 12. Tickets start at $34.99 GA and at $29 for children 16/younger, with timed, flexible, VIP options.

Denver’s Sports Castle — a historic brigade of ivory columns one might coincidentally expect to see boasting in England, and once home of the famed Gart Brothers and Sports Authority (think, “Sniagrab”) — came under new ownership a little less than a year ago after sitting mostly bare since 2016. In recent years, the space has hosted local artisan shows and beverage stations, with sights for ongoing events.

The Sports Castle’s current event greeted early previewers with the help of Visit Denver, including Non Plus Ultra, which manages the venue, with VR pop-ups by immersive tour-group, Starvox Exhibits.

If you’re in the know, or are just learning about Banksy, you might first wonder: ‘How does walled graffiti, in large scale no less, make its way to an exhibition?’ And, ‘by an anonymous rebel who defies rules at, or in spite of, any cost?’

“There is nothing more dangerous than someone who wants to make the world a better place.” -Banksy

The exhibited art, while of Banksy indeed, is not authorized by the artist but offered in a private, curated collection that was certified by Pest Control, “the only body authorized to authenticate Banksy’s art.” Works, which would otherwise reside on walls and bridges or stay hidden in private homes and warehouses.

Goers will step through a quiet but stirring maze of paintings, sculptures, documentary clips, and plenty of thought-provoking quotes and soul-appeasing art (or gut-punching, depending on your flare). Artistically, Banksy is known for the simplistic, stencil-technique, depicting disenfranchised rats or juxtaposed war criminals, always dripping with a message. As anti-establishment as the art is, it has arrested the attention of viewers on a global scale.

Pieces displayed span key periods of the artist’s work between 1997 and 2008, such as “Rude Copper” and “Rage, the Flower Thrower,” including a story nod to the infamous prank when the “Girl with Balloon” painting sold at an auction for more than $1 million and spontaneously reduced itself to shreds moments after purchase.

Love him or leave him, Banksy is estimated to have raised more than $30 million for charity over decades in artwork, including donating funds from art sales to hospitals, war-torn communities, and populations experiencing homelessness.

All, while continuing to give a voice to the voiceless, with a secret spray can. 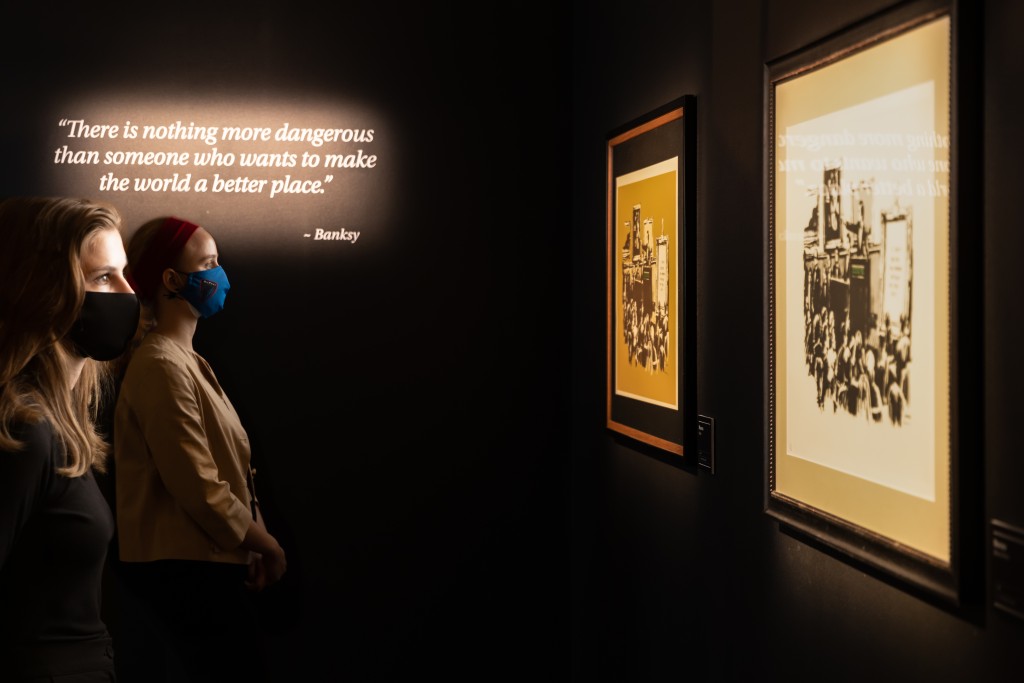 Turn Your Part-Time Gig into a Full-Time Business