In late May, just seven drilling rigs were operating in Colorado, compared with 31 on the same date a year earlier. And the price of oil may not have fully justified even those seven rigs: It was near $60 a barrel at the year’s start but dived to $15.71 as of May 1. The battering the Colorado oil and gas sector has taken this year looks even more devastating given 2019’s record-smashing production.

The oil and gas patches have always been places of booms and busts, but this beats anything ever seen before. Can the sector ever recover?

Yes, because the long-term fundamentals of the industry remain strong, says Dan Hailey, the chief executive of the Colorado Oil and Gas Association. “But we also know that it will be a difficult road ahead,” he adds.

The industry has always been cyclical. “People who are veterans, who have been doing this a long time, understand this,” he says. “At the same time, we have to get better, get more efficient, use new tools and new data analysis, embrace new technologies and cleaner and safer methods in order to continue to move forward.”

But mid-June brought news of a Chapter 11 bankruptcy filing by Denver-based Extraction Oil and Gas, one of the larger producers in Colorado. That same day came news that BP, the world’s sixth largest oil and gas company based on market valuation, told shareholders it expected to write down as much as $17.5 billion of its oil and gas holdings. That’s as much as 12% of the company’s previous value of the oil and gas assets. The New York Times cited analysts in describing a shifting view of the future. “Investors are skeptical of all but the most profitable fossil-fuel investments because it is not clear that there will be demand for them – especially as many governments strive to meet the requirements of the 2015 Paris Agreement on global warming.” 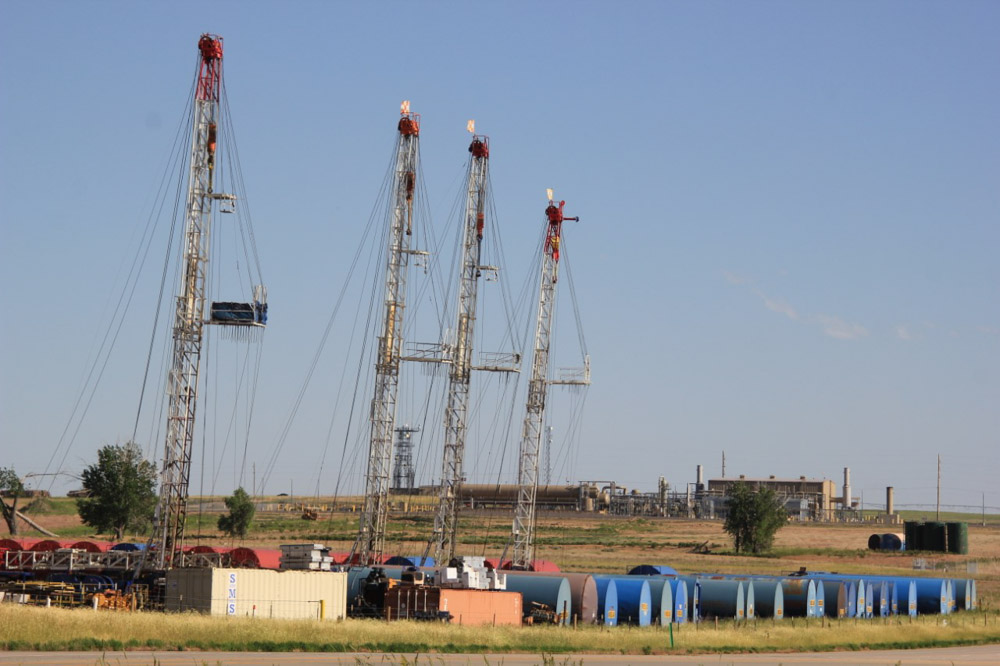 Crude oil production more than quadrupled from 2010 to early 2020; but drilling rigs were idled, as was seen along the Weld County Parkway between Kersey and Keenesburg in June. Photo by Allen Best.

In 2017, Colorado had 89,000 direct, indirect and induced jobs in upstream and midstream oil and gas activity. That includes the exploration and drilling as well as transport and storage. Denver — where no oil or gas extraction occurs — and Weld County led the state in direct jobs, although Denver had the most induced jobs, according to Michael Orland, managing director of EconOne Research, in a study prepared for the Colorado Oil and Gas Association, one of the state’s two primary industry groups.

COGA had tallied 4,500 laid-off workers as of late May, but more were likely, due to a lag in reporting.

“If we didn’t have the pandemic, but we had the downturn in the energy sector that we are seeing, that would be the headline story,” says Brian Lewandowski, executive director of the Business Research Division at the University of Colorado Boulder’s Leeds School of Business.

Some 93% of Colorado’s oil production occurs in the Wattenberg Field. The area extends from Denver’s suburbs in Adams County northward to beyond Greeley, overlapping into Boulder and Larimer counties. Production in the Wattenberg has grown rapidly during the 21st century, the result of more effective extraction techniques, including horizontal drilling, improved hydraulic fracturing and application of other technologies.

The field’s production has grown from 17.6 million barrels to 163.3 million barrels in the decade ending in 2019. That’s more than a tenfold increase. Gas — a byproduct of oil in the Wattenberg — increased nearly five-fold. These hydrocarbons can be extracted at relatively shallow depths of 8,000 to 10,000 feet from the Niobrara and Codell shale formations. That has made drilling less expensive in the Wattenberg than some other, deeper formations.

This boom in production occurred even as operators fretted about the impact of a law adopted by Colorado in April 2019 that shifts the regulatory landscape in Colorado to give equal priority to health and safety concerns as to production. It grants greater powers to local governments to regulate oil and gas and requires efforts to stanch leaks of methane, a powerful greenhouse gas, a task state regulators are still trying to get their arms around. In Weld County, though, even as the oil and gas economy boomed, some angrily denounced Gov. Jared Polis with roadside signs: “Why does Polis hate oil and gas?”

Weld County and the Wattenberg are nearly synonymous. Weld County produced 88% of Colorado’s 193 million barrels of oil last year. The next closest was Adams County, at 4%. Weld County is where the money is —  or will be for a while.

Oil and associated natural gas deliver two-thirds of Weld County’s assessed valuation. The value, though, depends upon the prices of these fossil fuels. A year ago, crude oil fetched around $60 a barrel. Earlier this year, the price of crude had actually dipped below zero. More was still being produced than could be stored. By late May, it had recovered to above $32 per barrel, but justifying the enormous expense of drilling in the shale formations requires a higher price. There’s a lag period between price realities and tax collections, though. This year’s dive will ding the county property tax collections by 50% to 55% in 2022.

Gloom remains scant at the Weld County Court House in Greeley, however. Senate Bill 181 gave counties more jurisdiction over permitting. “You wouldn’t think (so), but there is actually quite a bit of activity in that department right now,” says Don Warren, the director of finance and administration. Once oil gets back above $35 a barrel, he expects resumed drilling. “I have been in Weld County for 42 years,” he says. “Anytime there’s a bust, people say that’s the end of it. But the industry always comes back, and with new technologies and more efficient ways.”

Demand may take a while to rebound, though, says Sarp Ozkan, director of energy analysis at Enverus Market Intelligence, a multi-platformed energy analyst with a Denver-area office. The demand trough created this year is just so deep it will take two or three years for recovery. “Compared to last year, we have destroyed about five years of demand growth,” he says. “It will take a while to recover from that. Without demand, there’s no way for prices to pick up.” 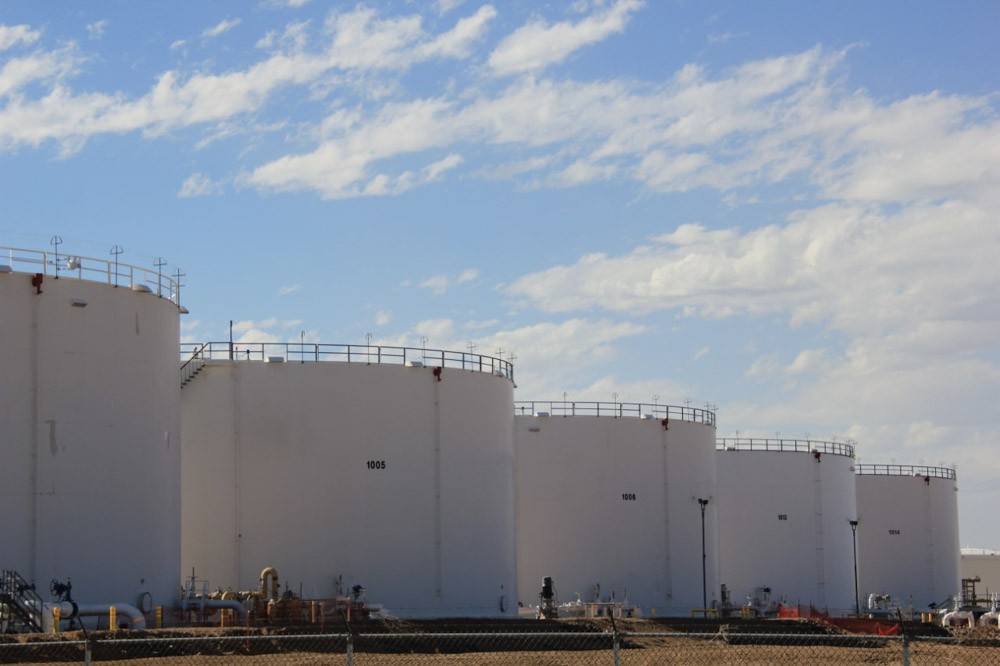 Colorado accounts for almost 4% of U.S. total crude oil production and also holds about 5% of the nation’s economically recoverable crude oil prices, according to the Energy Information Administration. Photo by Allen Best.

Given the low prices, some wells have been shut in. “When we look at crude oil at $25 a barrel, that is very near shut-in territory for a lot of operators, especially in areas that are away from demand centers and have to pay transportation,” Ozkan says. There was enough public concern in May that the Colorado Oil and Gas Conservation Commission issued a paper that assured that this can be done safely. “Although production equipment is larger in scale, it is very much like the way a homeowner turns off the water to their garden hose,” the agency’s May 11 Readiness Whitepaper says. “Valves on the wellhead stop the flow of oil and gas that would otherwise be directed to sales pipelines or production tanks.”

Wattenberg drilling companies were already getting pushback from investors, who felt shortchanged by a slight slowdown in Colorado’s massive oil production at the beginning of the year. Then the double whammy hit: The spread of coronavirus toppled demand just as Russia and Saudi Arabia loosened their spigots in a price war.

That price war ended in mid-April; prices began rising, but some smaller operators in Colorado have already fallen out. Ozkan sees Occidental (which acquired Anadarko), PDC and Noble — the three operators have more than 60% of market share in the Denver-Julesberg Basin, in which the Wattenberg is located — being better able to deal with the downturn, because of the volumes they have and internal cash flow.  He sees companies struggling to justify any sort of drilling plans until prices return over the next three years to above $50. Below that threshold, he says, “it’s very difficult to envision any of these operators being able to generate any sort of cash flow.”

Getting to Net-Zero: How Businesses Can Drive Actionable Change