The crash has hit jobs, business income, and state and local taxes hard. The impact has been even more pronounced in tourism-heavy local economies

With the novel coronavirus rampaging across the country in early March, occupancy and visitation in Colorado’s tourism hotspots experienced a big bust after an unprecedented boom.

The numbers are downright ghastly. According to Oxford Economics, total Colorado traveler spending was $2.99 billion from March 8 to July 25, 2020, compared with $8.69 billion last year. That’s $5.7 billion lost to the virus – in just one industry and one state over four months.

The Colorado Tourism Office estimated hotel occupancy in Colorado between 30% and 40% as of the summer peak, plummeting from about 70% in 2019.

The crash has hit jobs, business income, and state and local taxes hard. The impact has been even more pronounced in tourism-heavy local economies.

In Telluride, for example, total sales tax receipts for March were down 38% – or the equivalent of about $15 million in taxable spending – from 2019. After a roughly 20% decline in April and May, the June tally was down 36%.

“Tourism is our livelihood,” says Michael Martelon, president and CEO of Visit Telluride. “It just gets concerning. You’ve just got to deal with it as it comes.”

How much of Telluride’s economy is based on tourism? “Well, I say 100%,” Martelon answers. “If we didn’t have tourism, we wouldn’t have any other industry.” Analysts have pegged it a little lower, but still at a whopping 80% or so. 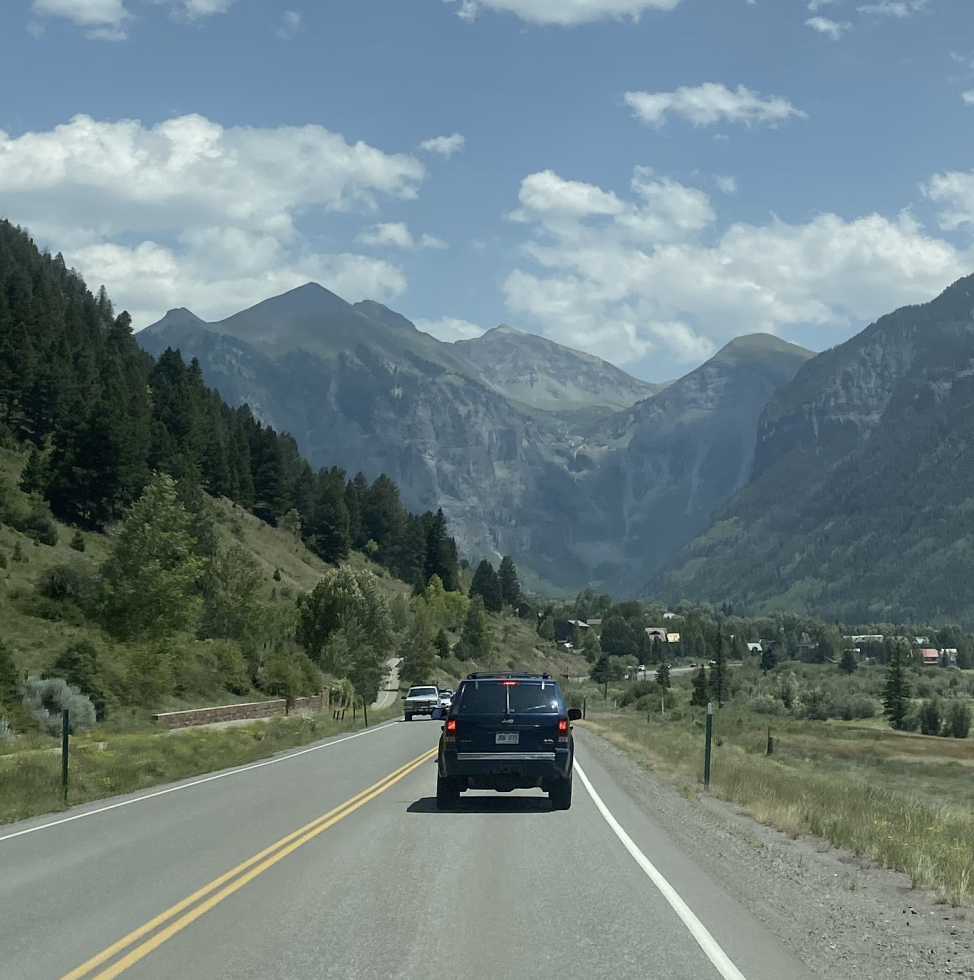 In Telluride, shown here on the approach from Highway 145, big summer festivals were replaced by small group gatherings.

All of the big festivals – from bluegrass to film – were called off. “The festival mecca is flying without a festival this summer,” Martelon says. The economic loss is “millions and millions of dollars.” In place of festival crowds, small groups are the norm. “Small – as in eight or less – is the new black,” jokes Martelon. “It’s a different vacation. You hang out with your family. You hang out in groups of no more than eight. And what’s wrong with that?”

By early July, Telluride’s numbers started to bounce back, with a twist. Retail and restaurant sales were “as strong or stronger” than the 2019 take, thanks in large part to more second homeowners weathering out the virus in Telluride. The number of second homeowners was up about 30% in 2020 in July. “Instead of renting their places, they’re staying in them,” Martelon says. “It feels busy in town.”

COVID-19 regulations call for lodgers to limit maximum occupancy to 50%. That made for some logistical challenges. “Lodging is the one that’s really taken the hit,” says Martelon. While occupancy is down, average daily rate is up.

The pandemic is forcing restaurateurs to embrace “a catering model,” he adds. “How do we innovate in such a way that it allows them [restaurants] to be financially sustainable and keep our guests fed? . . . In the summer, everybody’s got the tables outside and that’s great, but that’s not going to work in winter.” Martelon notes that Telluride’s trajectory was steep as of early 2020, with double-digit, year-over-year increases in tourism-related revenue. Dollar-wise, the local economy essentially doubled in size from 2010 to 2019.

Martelon describes “pent-up demand” for both tourism and Telluride. Reservations and owner holds are already up considerably for winter 2020-21.

“I do believe our brand itself will carry our marketing through the summer,” Martelon says. “If you’re considering a mountain destination anywhere in Colorado, I’m telling you, we’re on your list.”

The same could be said for Crested Butte. Gunnison County was “pretty early in the spread and the shutdowns,” says Andrew Sandstrom, communications director for the Gunnison-Crested Butte Tourism Association. “We shut down mid-March and essentially sacrificed the second week of spring break, which is usually one of the three biggest weeks of the whole winter season.” The timing otherwise fortuitously overlapped with “mud season,” he says.

According to data from DestiMetrics, lodging occupancy was down 45% in Gunnison-Crested Butte in June. That’s bad, but it’s a lot better than the 80% average decline DestiMetrics found in competing mountain destinations.

Arrivalist, using location data from mobile phones, “showed June about flat,” Sandstron says. “We had similar arrivals to last June.” The area has a different draw than some of its peers. “In comparison to some other mountain valleys, we aren’t as event-driven or conference-driven,” Sandstrom notes. “Generally, our marketing and our draw has been the public lands, open space and trails, which in the time of social distancing seem to be very popular.”

The marketing budget has remained intact, “the thinking being that the best way to recover and continue to get sales tax is to bring tourists back,” he adds. “We’ve been very hyper-focused on trails and public land. We’ve kept on with that message.”

The result could be too much of a good thing. “The amount of campers and RVs coming into the area is way more than normal,” Sandstrom says. “It’s outstripping capacity.”

Higher demand for the great outdoors could benefit many Colorado destinations. Before COVID-19, the road-trip radius usually maxed out at about five hours. Now people will drive about 10. “They’re seeking out the more rural destinations like ours,” says Theresa Blake Graven, tourism and communications director for Visit Durango.

With Fort Lewis College and a relatively diversified economic base, total sales tax receipts for Durango were down about 5% for the year through May. Lodger’s tax, however, was down a whopping 40.1% for the year. While it rebounded somewhat in July, Visit Durango has projected a 45.7% drop for 2020, a $500,000 hit to the city coffers.

“Our economy is over one-third dependent on tourism,” Graven says. “We’re lucky we’re not 50% or more like some of my neighboring destinations.”

The loss has resulted in a 15% cut in Visit Durango’s budget. “We paused everything we could during the stay-at-home order,” Graven says. There were also staff cuts and furloughs, the closure of the downtown welcome center, and less advertising.

Could this be the start of a vicious cycle?

It’s too early to tell for Durango. Visitation rebounded in early July. Vacation home stays were up. So were camping trips. The landmark Strater Hotel had no vacancy on July 4 weekend.

“People feel safe traveling with their own friends and family,” Graven notes. “Meetings and events and international [travel] are going to be the slowest to recover.”

Graven says she thinks it’s important to double down on tourism in tough times. Visit Durango is advocating for a 5% lodger’s tax. The current 2% add-on to sales tax is notably low for a resort town.

“We’re currently advocating for a 3% increase in lodger’s tax to bring us up to the industry standard in Colorado,” she says. “We’ve never done an increase.”

While out-of-towners shoulder room taxes, there’s still some stubborn local resistance to any kind of tax hikes, she adds.