Taking stock of the future 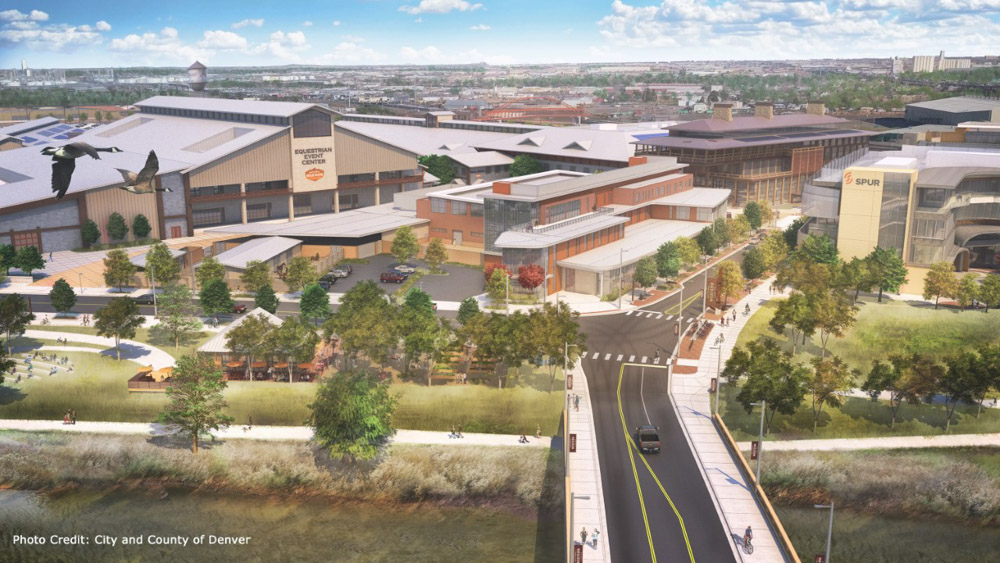 The Stetson hats will be noticeably absent from strip-tease joints and elegant restaurants in Denver during the 16 days in January when the National Western Stock Show and Rodeo is normally held. Coronavirus concerns forced cancellation in 2021. When the stock show reconvenes, presumably in 2022, the complex will have the beginnings of a new look and a new name: the National Western Center.

You will still be able to smell manure, as the stock show isn’t going away. Keeping the stock show in Denver was, in fact, what motivated this redevelopment being aided by nearly $1 billion in public funding. But the more than 2.2 million square feet of building and designed outdoor space are being designed to serve broader, more diverse purposes.

The ambitious goal at the 250-acre National Western Center is to create “the global destination for agricultural heritage and innovation.” That’s on a year-round basis, not just 16 days in January. And food, not just livestock. Think also of concerts and festivals, farmers’ markets and sporting events, classrooms and laboratories. The City of Denver is the master developer.

One major component will be the three buildings of the Colorado State University system’s new Denver campus, which it is calling Spur. Dirt-moving began in May for the 114,000-square-foot structure to be called Vida, whose uses will play off several of the university’s core competencies at its Fort Collins campus, most notably veterinary medicine and health science. Completion is expected in September 2021.

Water will be the theme of the second building, Hydro, to be completed by summer of 2022. At Terra, the third building on CSU’s spur campus, food and agriculture will dominate.

Not everything has been worked out, either in CSU’s three buildings or in the broader National Western Center. A major question is whether the 70-year-old Denver Coliseum, a 10,200-person venue, will be replaced or refurbished. Economic uncertainty caused by the impacts of Covid-19 has postponed planning for that building and adjoining land south of Interstate 70.

A couple decades ago, Denver’s newspapers were full of snarky comments about the city being a “cow town” that needed to grow up. Cows were indeed once a major part of the city’s economy. The Denver Union Stock Yard Company was founded in 1881 to organize the market. Three major rail lines paralleling the South Platte delivered cattle, sheep and pigs. Pens and an elevated viewing walkway were constructed. The stock show arrived in 1906.

In 1917, the first of several meat-packing plants began operations. Barnyard sounds could be heard at all hours of the day and night in downtown Denver, two miles away, as 40,000 cattle, sheep and hogs took their last walk. The packing houses, in turn, drew immigrants, with Poles and those from other Slavic countries populating the nearby neighborhoods of Elyria, Swansea and Globeville.

A shift began after World War II. Feedlots and then meat-packing plants moved closer to sites of production. Think of the Monfort family’s operations near Greeley now owned by the Brazilian giant JBS, or the meat-packing plants of Morgan County. By the early ’70s, the meat-packers were gone save for a rendering plant that remained into the late 1990s. The stock show, of course, remained. And if you bicycle or walk on the concrete path that hugs the South Platte River north of I-70 you can still see the truncated version of what is called the Sheep Bridge. It was constructed in 1928 by the Sigman Meat Co. to connect the stockyards with the meat processors. 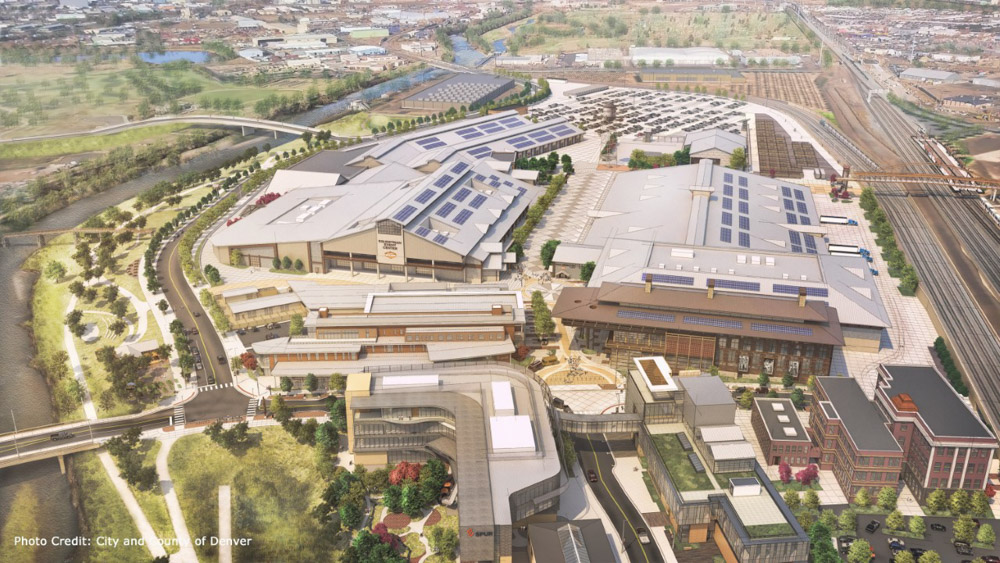 As Denver guides the vertical redevelopment, from water and sewer lines to new structures and refurbished historic buildings, the new nonprofit National Western Center Authority will define the programming under the leadership of Brad Buchanan.

Buchanan brings an unusually personal interest to this interface of urban and rural, city and countryside. He arrived in Denver in 1982 as an architect. He focused on mixed-use, urban infill projects and some affordable housing developments. In 2014, Denver Mayor Michael Hancock appointed Buchanan as executive director of Denver Community Planning and Development. By then, Buchanan was leading a split existence. In 2006, he and his wife, Margaret, purchased a ranch near Strasburg, about 30 miles east of Denver, where they set out to produce grass-fed beef. When he mentions having a morning meeting with the mayor of Denver and baling hay in the evening, it likely has happened.

In 2014, Buchanan outlined his thoughts in a TEDx talk in Denver. “We must create places that are both urban and rural, and they must be connected and grounded,” he said. “And the only way to do that is to become expert in the essence of both of those places. We must understand what makes them tick.”

When Buchanan gave that talk, a feasibility study had already been published that described the National Western Stock Show as the Super Bowl of stock shows. The same report detailed dissatisfaction among users due to the age and deficiencies of the facilities. Revamped facilities and a broader, year-round schedule could result in 88 new events and 910,500 new visitors annually, with spending that keeps pace.

A coalition of partners had also been formed: the City and County of Denver, the Western Stock Show Association, the Colorado State University system, the Denver Museum of Nature and Science, and History Colorado. Legislators committed $250 million to CSU, 80% of that to go to CSU’s presence at the Denver site. Voters in Denver, by a 2-to-1 margin, approved $637 million from the lodgers’ tax proceeds for the project. Total funding from these and other sources came to $765 million.

“Make no mistake that the project was borne out of a desire to create a stable and new home for the National Western Stock Show for the next 100 years,” Buchanan says. “But from the beginning the project also had to look beyond the 16 days in January at a year-round destination. That is what is being created with all the partners.”

Beyond the core partners are other teammates. For example, Vida, CSU’s first building on its Spur campus, will include the Dumb Friends League Solutions-Veterinary Hospital, a donor-supported facility. It will also have room for the Temple Grandin Equine Center, for equine-assisted activities and therapists. The food and agriculture building will include Together We Grow, an agribusiness consortium that has major agriculture commodities, educational institutions and government agencies.

Water will have an important role in the new National Western Center. The land lies along the South Platte River, but there is currently no connection. The riverfront is a no-man’s land whose principal feature is a 6-foot-diameter concrete pipe. There will be two multi-modal bridges across the river, connecting the campus to the Globeville neighborhood.

That pipe will be replaced and buried. It conveys sewage from downtown Denver and along the Cherry Creek Basin as far east as Interstate 225 in Aurora to the Denver Metro Wastewater Treatment Plant. The wastewater is warm, and that heat will be tapped to satisfy a substantial portion of the energy needs of the campus. It’s among several goals in sustainability for the campus.

The water building on CSU’s Spur campus will house the new Salazar Center, the creation of former U.S. Senator Ken Salazar that intends to focus on conservation throughout North America. It will also house the water quality laboratories for Denver Water.

If other precise uses are still being worked out, Reagan Waskom, director of CSU’s Water Institute, presents a strong case for why the venue will become important in Colorado and beyond. Simply put, he says, metropolitan Denver and the northern Front Range cannot count on accommodating new population growth with more large-scale imports of water from the Western Slope. The water just isn’t there, at least reliably, and the changing, warming climate may imperil even existing diversions. The South Platte, an already hard-working river, will be asked to do even more.

“At this point, it’s just a matter of holding onto what we have,” Waskom says. But in this, the northern Front Range is hardly alone.

“You can pack a lot of policy, technology and research-related questions into that physical locality (National Western) that will have global implications,” Waskom says. “I see the water building being a global destination for people who want to come to a great and growing city in a highly productive agriculture region that has a changing climate.”

While CSU has no plans for putting faculty and researchers in all its buildings, Waskom does see full-time staffing in the water building along with visits from Fort Collins-based faculty members. This is where CSU plans to have conversations with metro Denver.

Think of the redevelopment of the stock show complex being somewhat akin to that of Union Station. There are differences, of course. The stock show area is bigger, the size of Denver’s Washington and Cheeseman Parks put together, and on the edge of Denver’s region of urban necessities: a power plant, steel-and-tire recycling yards, a refinery, and so forth. Union Station has a smaller footprint but is at the confluence of metropolitan Denver’s light and commuter rail lines, all of this at the edge of 17th Street’s gleaming towers and the 16th Street Mall.

Now think about that empty field west of Union Station 20 years ago. There’s a lot of empty now in that area where you go to the stock show, but this, too, shall change.