How one Denver company pivoted from profits to virus protection

COVID-19 nearly upended their marketing campaign, saved only by the owner's creative handiwork 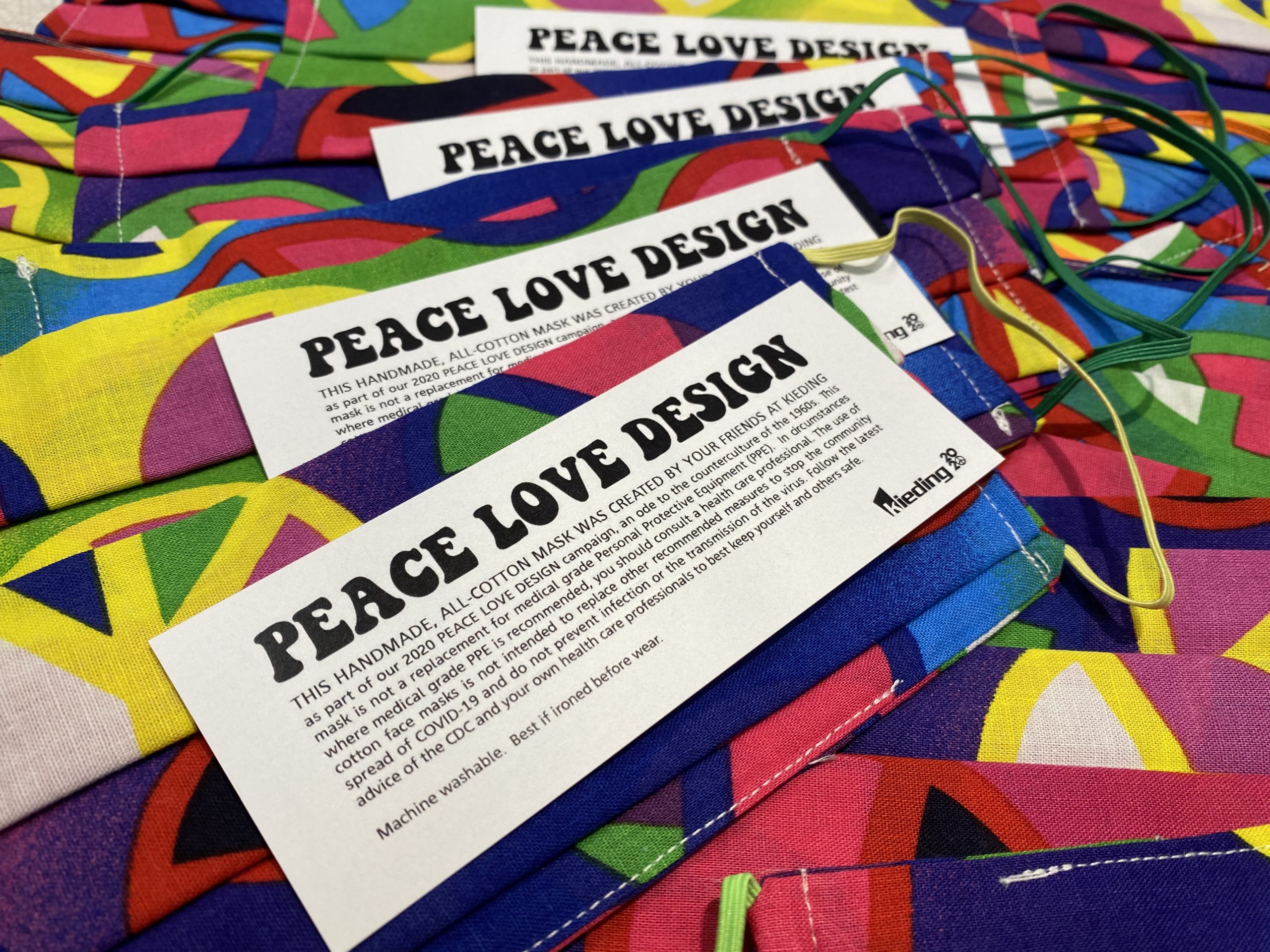 Jenkins first used the “psychedelic” print for the company’s marketing.

Tia Jenkins has a new-found respect for serendipity.

Jenkins is owner and architect at Kieding, a Denver-based interior architecture and design firm. She’s also a prolific seamstress with five sewing machines and a portfolio of handiwork from toys and holiday ornaments to quilts and clothing. But it is COVID-19 that offered her and the firm a unique opportunity at precisely the right time.

“Face masks were very tough to get early on,” Jenkins said. “People have forgotten that. As the shutdown was coming to an end, I was most concerned with the safety of our staff and management coming back into the office. Even Amazon masks were on back order until June, or later. I was pretty sure at that point that I could put together pieces that would offer both style and protection.”

So, with a stockpile of random quilt fabric, Jenkins began sewing together cotton masks for Kieding’s office team.

“There was no aesthetic consideration, which is ironic, of course, since we’re a design firm,” she said, but the goal then was to make certain that the office had redundancy in place for sanitizing stations, COVID signage, and masks for employees and their families if they needed them.

“That seems like such a long time ago,” Jenkins admits. “All these things were happening at the same time, and all small companies were in the same boat, trying to assess what could be done to pick up business where it left off.”

One of those concerns for Jenkins was the firm’s marketing program. 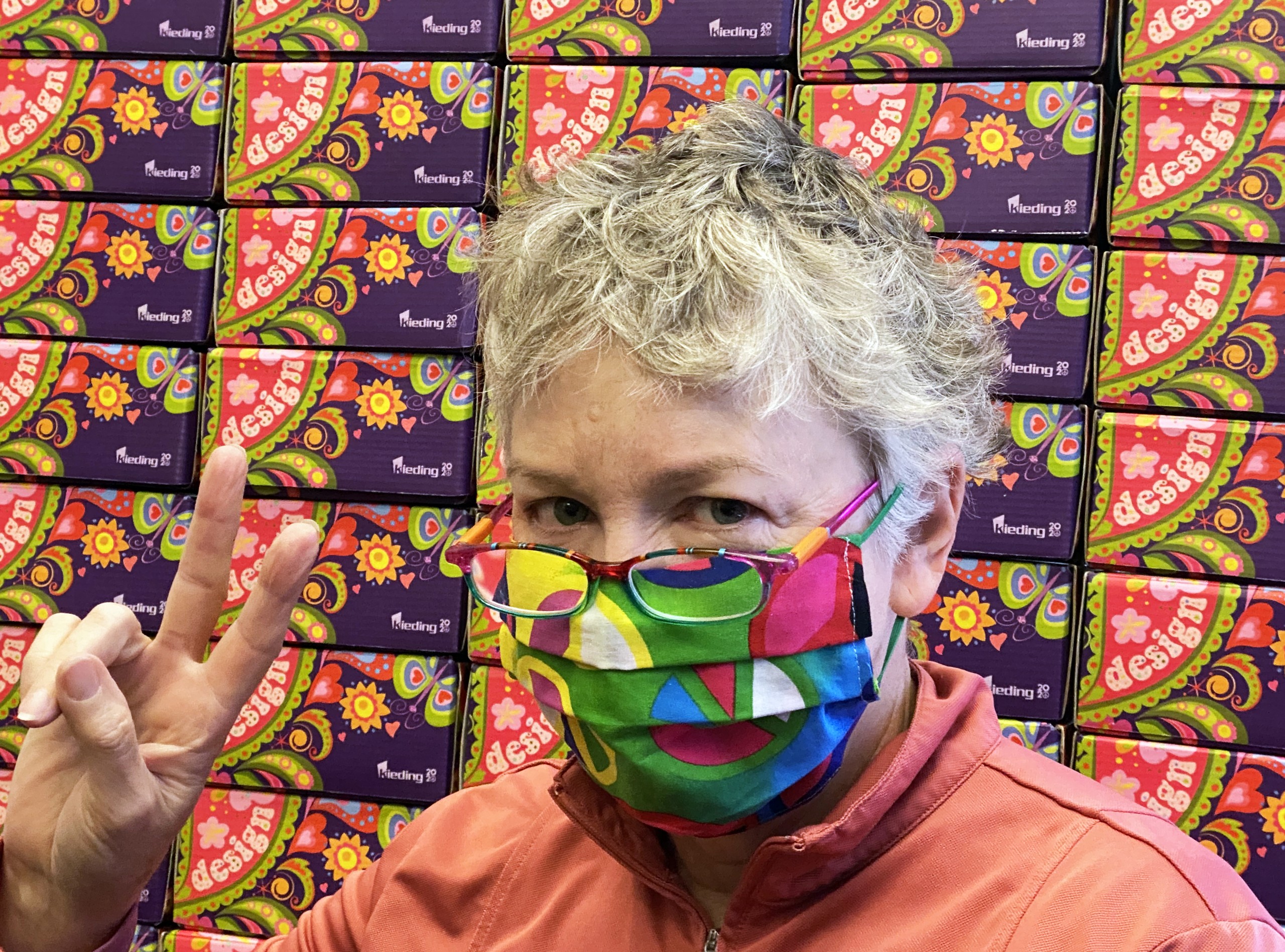 The planned marketing campaign consisted of a tribute to the 1960’s social movement with its unique design aesthetic as a way to soften the discord in the U.S. government and American society in general. Jenkins describes the campaign as “a bit on the esoteric side.”

“We didn’t want to address or even refer to the politics of an already chaotic election year. That’s not what we’re about,” she explained. “It was and is about fun with design and how that translates to the modern office.”

The feature item of the campaign was a custom-designed box filled with 1960’s-style replica memorabilia. The problem was that this phase of the firm’s campaign was designed to be high-touch. That is, Kieding senior project managers were to hand deliver the boxes to key clients across the metro area. COVID-19 quelled that notion.

“There is always more impact when you can offer a marketing piece in person,” Jenkins pointed out. “A lot of our clients are also friends, but we weren’t going to compromise safety in any way by making non-essential office visits.”

While Jenkins and her team contemplated scrapping the program altogether, she floated the idea of adding face masks to the box. “Frankly, the whole 60s theme gift boxes in the midst of this pandemic seemed small, maybe even frivolous,” she explained. But the masks offered a practical tie-in, a real-time solution to just one small issue people were having with virus protection.

“We had to make the masks look like they were part of the presentation from the beginning,” she said. “Dropping in a piece made from plaid or polka-dot material just wasn’t going to cut it.”

So, Jenkins set upon the difficult task of finding enough “period-appropriate” cotton fabric along with elastic for the roughly 150 boxes in the company’s marketing inventory. After a few weeks, she had ordered enough materials to put together an assembly line for mass production, or as “mass” as her time would allow.

“We felt confident at that point that the masks were a compliment to the overall theme of the marketing piece,” she said. And Jenkins was correct. She began getting immediate feedback from the first group of recipients.

“People liked the color and lightness of the box and the 60s stuff, so the marketing side of it was working,” Jenkins said. But the masks immediately became the hot item. Within a short period of time, Jenkins began getting calls asking where the masks could be purchased.

“Those masks are uplifting. They’re very original, creative and colorful in our dreary world these days,” said Anne Stilson-Cope, president and owner of Centennial’s Corey Electrical Engineering. “They’re fun and different and my staff liked them immediately,” she said.

Corey was one of several industry firms early on that asked to purchase the masks in quantity, but Jenkins had no plan to sell them. Instead, she asked that those companies make donations to their favorite charities.

“There was no organized process for that,” Jenkins pointed out. “It was off-the-cuff. But most told me they would donate $100 to $200, which is very generous. The goal from our perspective was to pay it forward, and that is exactly what they offered to do as well. We were very happy about that.”

By early summer, the market was flooded with masks of every conceivable theme, color, size and shape, none of which mattered to Jenkins. “It never was a competition and there never was a profit motive,” she explained. In fact, interest in the Kieding masks remained steady, even growing into the summer months. Jenkins added new inventory with themes to match the autumn season, Halloween and Thanksgiving, the presidential election, the holidays, and the new year.

“They’re very well-made, and come in all kinds of color combinations,” she pointed out. “We had gotten masks for our building with our company logo on them, but we prefer to wear the Kieding ones.” Taylor and her firm contributed to the Food Bank of the Rockies in lieu of payment for the masks.

Jenkins said that she has made over 500 masks to date and will continue to add to the inventory with “amusing” and seasonal themes.

“I enjoy the whole process,” Jenkins admitted. “Yes, this activity helps me personally with the stress of this pandemic. The busywork is distracting and therapeutic. But the return for us is that we’re protecting people and hopefully putting a smile on their faces at the same time.”

And what of those five sewing machines? “Well, you have to have the right tools if you’re seriously creative,” Jenkins said. “You’ve got to be prepared for bumps in the road. You’ve got to have more than one way to solve problems, and you’ve got to be able to pivot quickly. Just like interior architecture.”

Denver-based Kieding is a woman-owned business. Tia Jenkins has owned and operated the firm since 2007.