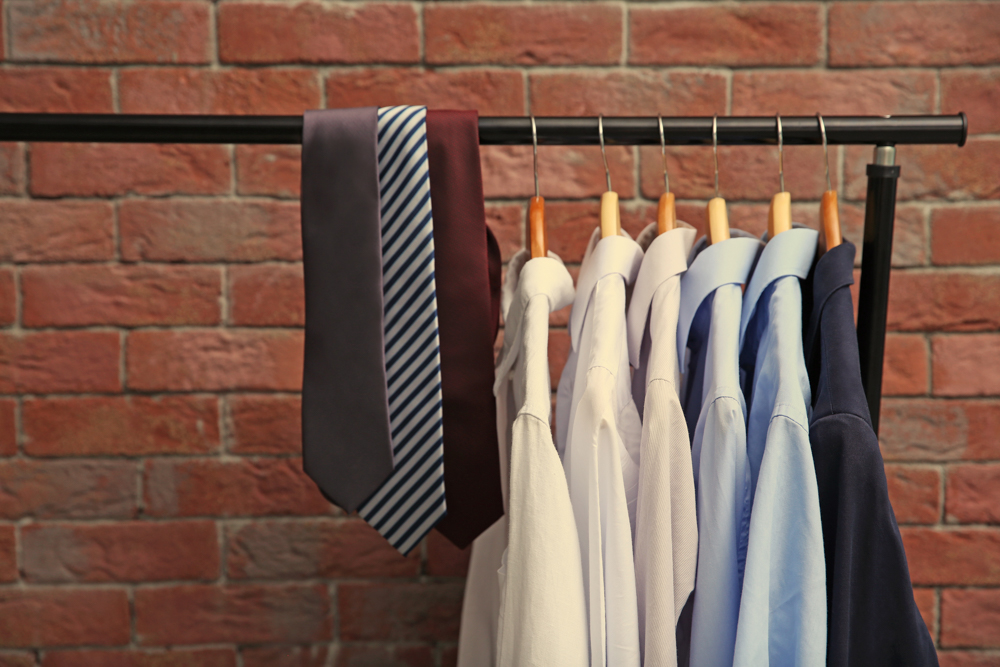 Carl Koelbel loves the ritual of ordering a custom shirt, getting fitted for a new suit and picking out the perfect tie. But the 36-year-old COO of the eponymous real estate developer abruptly stopped making the rounds at Suitsupply and Trumaker in 2020.

“I like talking with the salesperson at Suitsupply, or the designer at Trumaker,” Koelbel says. “With the mask on, it’s tough to have that connection. And I really don’t like clothes shopping online, because you can’t feel the material, you can’t see how it fits. But I hung with wearing the tie, even on the Zoom calls. Then after Christmas, I really noticed the casualness of the calls increasing, and now I’m buying more casual clothes.”

Is the suit and tie another COVID-19 casualty? Has the $800 Golden Goose sneaker replaced the $700 Christian Louboutin pump? The question of how the post-pandemic consumer will shop for clothes – where, when and for what? – confounds everyone from shop owner to manufacturer to landlord to forecaster: Deloitte & Touche LLP’s 2021 Retail Industry Outlook reports that six in 10 retail executives expect recovery in a year or two, but 25% say it may take up to five years.

“Here in Denver, the market is strong,” says Wendy Ralston, Deloitte’s Denver consumer leader. “Housing prices are up, unemployment is low. I would think Denver would recover at least as fast as the rest of the country. But I don’t think we’re ever going to go back to work the same way. Too many people have enjoyed being at home. If I’m home two days a week out of five, my wardrobe will evolve with that.” 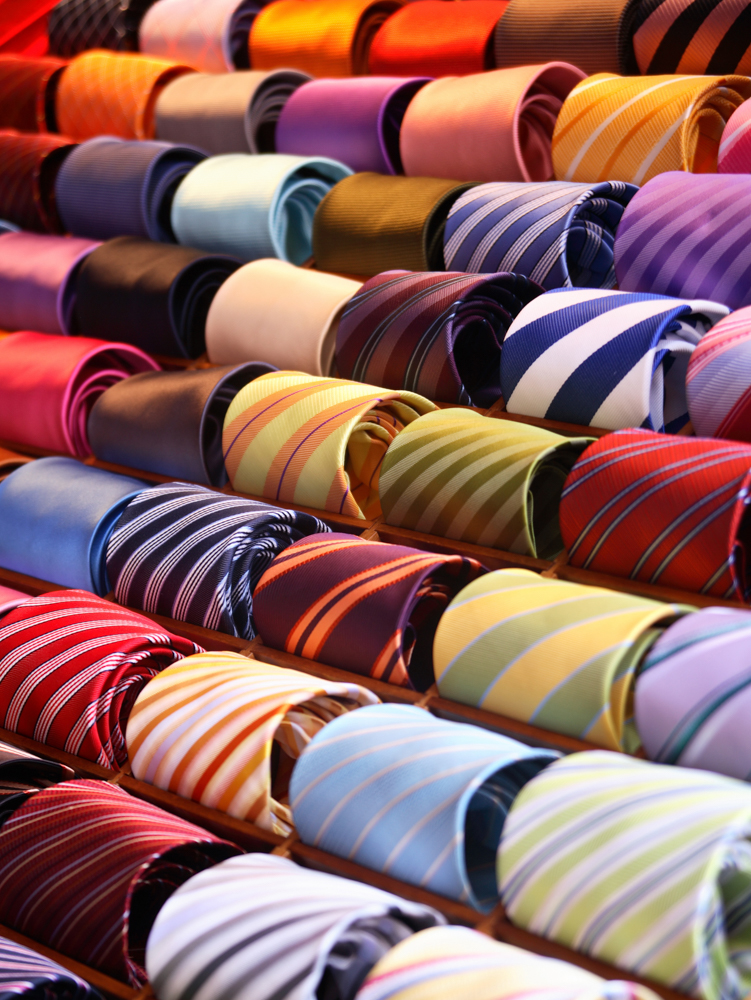 Ralston notes the impact of the bifurcation of the rich-or-poor population. Karmen Berentsen, owner of A Line Boutique, sees that reflected in A Line’s sales of furs and fine jewelry to the segment that has money to spend, particularly participants in the “knowledge-based economy.”

“In the K economy, there are a lot of people who aren’t going to Greece, aren’t doing the yacht trips,” Berentsen says. “They want to buy but they don’t need more stuff, so they’re buying higher ticket items. When we got our fur collection in from Yves Salomon from Paris, I was amazed how fast they sold.”

A Line ranked 96th on our Top 200 Private Companies list for 2020, with $6.8 million in revenue for 2019. COO Brandon Barker recalls the spring shutdown of all four stores as “a very scary place” for a high-touch brand that serves style consultations along with wine, champagne or Pellegrino.

“We had no e-commerce,” Barker says. “So within three or four days, we got thousands of items up online and partnered with Cherry Creek Fashion for exposure to new readers and web traffic. We turned our Cherry Creek store into a warehouse to fulfill online orders 14 hours a day and then drive them around town. Within a day of launch, we had a huge sales day.”

Online sales accounted for only 3.3% of A Line’s 2020 revenue, which declined along with margins. But with landlord and vendor cooperation and a PPP loan, Berentsen retained staff, maintained salaries and declared, “We’re fine.”

“If something’s not selling the first few weeks, we have the ability to swap it out for something else,” Barker says. So out went the dresses and party clothes, and in came the loungewear and sweaters. The $800 sneaker is a popular splurge at A Line.

Rolling up their sleeves

The pandemic forced a reckoning for other Colorado clothing businesses. The mall at Park Meadows didn’t reopen until May 24, with its 175 tenants observing new protocols, precautions and capacity limitations. Krimson Klover women’s clothing founder Rhonda Swenson emerged from a backcountry ski trip in Canada to the shutdown only to learn that every spring order had been cancelled. Jeremy Priest’s Knotty Tie Co. confronted a world where, suddenly, no one wore a tie; after a successful 2020 pivot into producing masks, the company is pivoting again in 2021, with a new product line, new brand and new name: Goodform.

Dependable Cleaners, with 22 locations, quickly lost $1 million. Says president Steven Toltz, “I haven’t worn a tie in the last year, but I am sure I would still wear a tie to an event.” Toltz rolled up his shirtsleeves to put his business back into the black, cutting processing plants, adding six routes of home pickup and delivery, promoting wash-and-fold laundry service, and installing three automated 24-hour kiosks.

Krimson Klover’s Swenson found a buyer for all that spring inventory, Sierra Trading, and scaled down her business so much that she sold out of winter sportswear. “We’re fortunate that we’re in the outdoor space, which is faring much better than clothing overall,” Swenson says. “We’ve got ski, golf and tennis, swim. We’ve always done a lot of skirts and dresses, but, with where things are, where do you wear a dress? We’re doing a lot more athleisure – loungey, so you can lay around your house but still look cute going to the store. More comfort clothing. More soothing clothing.”

Designing three seasons ahead, Swenson envisions a colorful 2022. “I think by next year, people are going to want brights and happy colors,” says Swenson, who recently added three staffers.

Deloitte forecasts an early ’22 return to pre-COVID GDP levels in the U.S. At Cherry Creek’s Lawrence Covell, owners Joe and Amy Covell can hardly bear to think that far ahead. They wonder what their clientele will want this fall, and how their factories in Italy and England will keep up with pent-up demand that surely must explode, but when?

“The challenge right now is not so much economics,” says Covell, son of the founders. “It’s not like the recession when everyone was financially challenged. It’s demand. People are working at home and not traveling. The desire to go buy something is lacking.” 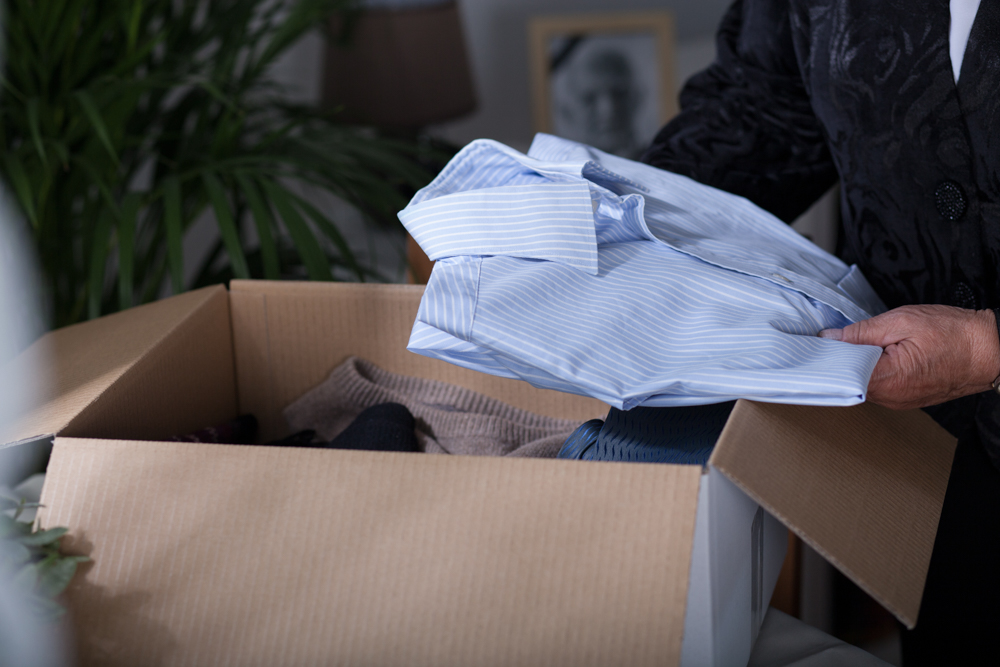 Woman putting her dead husband clothes into a box

“I think a little bit of disconnect is that tenants think there should be really aggressive, incredible deals, and landlords are just not there,” Key says. “Landlords are not ready to give away good space. Good space is still holding value.”

Key, dressed in jeans, a black top and black jacket with fur sneakers (Garbarini), suspects there are tenants who are barely holding on through PPP loans, landlord rent relief and holiday sales. (A Line owner Berentsen, for instance, credits East West Partners for adding time on the back end of her Union Station lease while that store remained closed in the downtown desert.)

“Arizona and Florida, which were both light on restrictions, are doing fine,” Key says. “Retailers we work with in California are suffocating. In a place like Denver that has been moderate on shutdowns, tenants seem to be doing OK and fighting the fight. That’s not to say there’s not going to be a lot of fallout. But I don’t think we know yet.”

“There’s an interesting statistic,” Koelbel says. “In the U.S., there’s 24 square feet of retail space per person. In the United Kingdom, it’s four. We have built a lot more retail than I think we ever need.”

“Nobody wants to lend on it, no tenants right now feel comfortable leasing space, and the range of users has declined,” he says.

RidgeGate developer Keith Simon says his company has plans for a Lone Tree City Center in the eastern segment of its development, where Shea Homes has begun construction of 2,000 single-family homes. “It’s 32 square blocks with some large sites around the edges, four blocks more than Cherry Creek North. It will be a very urban environment with office to hotel to residential, and embedded retail as much as possible. But what’s our strategy for office space?”

Deloitte’s Ralston theorizes that the pandemic might create more demand in offices. “Fifteen work stations pushed together might not be the right model going forward. The per person square footage, I think, will increase.”

Deloitte’s dress code is “dress for your day,” depending on what clients and meetings are on the calendar. Ralston has not worn a suit and heels in nearly a year, and only her daughter’s plea got her out clothes shopping. “I’m very comfortable shopping online for my clothes,” she says.

That’s an alarming thought for A Line and Lawrence Covell, who have noticed the disappearance of customers during the pandemic. Their internet strategy is not to sell so much as to showcase inventory in hopes that it will lure the customer into opening their door to unparalleled personal service.

That approach, plus the promise of a customized $600 suit, has vaulted Suitsupply to global status in 20 years. Yet, rose-colored glasses-wearing founder Fokke de Jong sees Carl Koelbel’s lament of the workplace suit as a new opportunity in menswear.

“Going to the office in your sweatpants looks really strange with the nice furniture,” he told Retail Gets Real podcast. “It looks messy and it’s never going to happen. … So now it becomes complicated. To look casual and well put together – guys find that harder. So where do they turn? Service, and style advice.”

Colorado Gives Day: Online, ahead of its time