Executive Wheels: While the big car era is over, this car has just about everything you need

I was raised in the era of big cars and I have always liked them, particularly SUVs, although in the 1960s we didn’t call them that. I learned to drive in my mother’s Chevrolet Impala station wagon and my father’s Buick LeSabre, and I drove around a lot in my friend Tim’s parent’s 1964 GMC Suburban.

Fast forward 50 years and driving around in a big, gas guzzling vehicle is frowned upon as an example of conspicuous consumption. I have to admit, I felt a little self-conscious getting behind the wheel of the Toyota Sequoia, a big full-size SUV with some pretty unimpressive gas mileage statistics: 13 mpg city/17 mpg highway/14 mpg combined. But once I drove it around for a while – especially a nice mountain drive on a leisurely Saturday–I really didn’t care. It’s big, it’s heavy, it drinks gasoline like a sot, it takes up too much space, it’s hard to park–and it is absolutely a dream to drive. Never felt safer in any other vehicle, and it is most gratifying to notice that other drivers who would always casually poke their (car) noses out in front of a lessor vehicle simply cower and back up when the Sequoia is approaching.

While gas guzzlers were the norm back in the day, today they are anomalies; you just don’t see that many of them on the road (except for big pickup trucks, of course). But the sales numbers aren’t that impressive. It’s a niche, to be sure.

For example, Sequoia sales in 2019 in the U.S. were 10,289 units. Just before the effects of the Great Recession, in 2008, Sequoia sold more than 30k units, and if you go back to 2002 U.S. sales of this large SUV passed the 70,000 units per year mark. By contrast, the same dynamic exists in sales of the competitive brands, although in the large SUV category Toyota is way behind the mainstay American brands. The Chevrolet Suburban, back at the turn of the century, was selling in the range of 150,000 units a year in the U.S. Those sales dropped off to under 50k units a year after the recession, bounced back to 60,000 units in 2018. Last year, however, the Chevy Suburban dropped off to just 51,928 units sold in the U.S.

So why choose a slow-selling Toyota large SUV as opposed to the Suburban? The Suburban is a nice vehicle, and it would be a good choice. But I must say that the Toyota Sequoia, to my eye anyway, is the most attractive of the segment. More rounded, less boxy, and more aggressive looking without appearing brutish. And, of course, the Sequoia is a Toyota, and it carries with it the well-earned reputation for quality and longevity.

I was surprised to learn that the 2020 Sequoia is only the 2nd generation of this vehicle, introduced 19 model years ago. I would have thought there would be more major modifications in that time. One of my car people (members of the review community) mentioned that the Sequoia now feels rather dated, suggesting that it is in need of a new generation. I disagree. Yeah, you can tell while driving it that the Sequoia hasn’t got most of the mostly cosmetic, whiz-bang trims and treatments you see in many other vehicles, but I’m old school and I appreciate the straight-forward approach. Besides, it’s not like this Sequoia is without the modern stuff: all of the modern safety and entertainment technology is here – all the media and radio options, hands-free phone, apps, and Toyota Safety Sense with pre-collision systems, lane departure, dynamic radar cruise control, blind spot monitoring. What’s lacking is overly complicated access to all of this technology, which suits me fine. 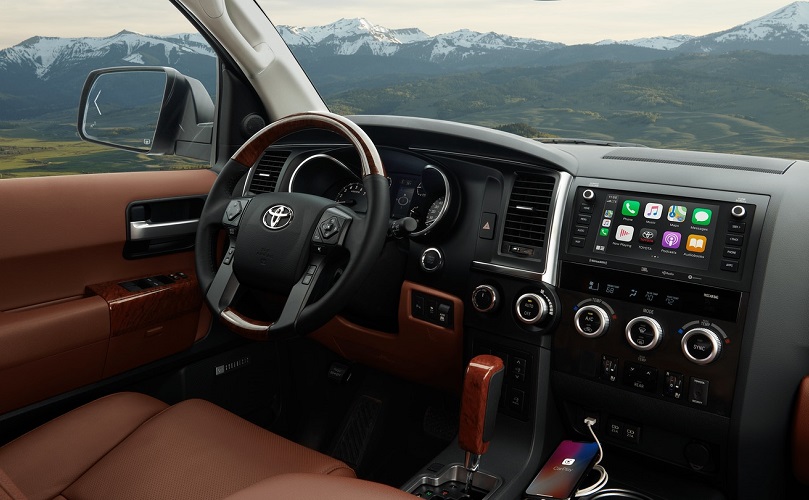 Now, it’s not like this vehicle is a sports car, so the handling isn’t what you would call nimble. But it is easy and smooth. In fact, the only problem I had with the handling all week long was that it’s difficult to park in some of the places that pass for parking spaces these days. I loved driving the Sequoia – it’s very quiet, it rides smooth and I only ran over a couple of curbs on corners where I failed to take a wider turn.

What made it a great drive was the 5.7-liter V8 engine, featuring some 381 horsepower, coupled with a 6-speed automatic transmission. This is one of those powerplants and vehicles that feels like it is going 40 mph when in fact you’re doing 75. Lots of power, lots of room, plenty of respect from the other drivers, being behind the wheel of a Sequoia is just a pleasure.

Of course, one of the more practical reasons to have a vehicle of this size is towing, and this Sequoia will tow up to 7,400 pounds, so you can bring a trailer, a boat or whatever you want and not worry about it. There is a Tow/Haul mode that alters the transmission shifting points while towing, so Toyota has thought of everything.

The only thing I didn’t like about this vehicle was that it was very difficult to stop the power window half-way down or up. On my personal Jeep, I can crack the window at any opening very easy, but on the Sequoia it takes some special touch and patience to do this.

But there are great things, little touches here that I love. Chief among them is the power window in the rear tailgate – opening it while driving is easy, doesn’t make the wind blow all over the place, but greatly enhances the fresh air flow in the car. I love this. The other plusses are the three rows for passengers (8), huge storage cubbies and very large mirrors (that fold in when locked) that offer maximum vision.

This test drive model I drove was the TRD Pro package, so it had some upgrades: TRD-tuned FOX shocks to handle any terrain, TRD alloy wheels, Rigid Industries fog lights, TRD skid plate and black-trimmed leather seats with red contrasting stitching. There was also an optional $1,050 for the TRD Performance Exhaust System. In addition, they tacked on $245 for a cargo cover and $379 for carpeted floor mats and door sill protectors. At just over $64,000 at the base price, and these few options added on (plus $1,325 in destination charges), the bottom line on the sticker was $67,029.

The Toyota Sequoia is so versatile, so safe, so comfortable; it’s a specialty vehicle, to be sure, but also a special one.