Word is getting out about Florence’s burgeoning arts scene

With galleries, artists and a craft brewery, the creative industry of Florence, Colorado may surprise some, but it will delight even more

Thirty miles west of Pueblo, the small town of Florence is often associated with ADX Florence, or Supermax, the highest of high-security prisons. It’s just one of more than 10 correctional facilities in the vicinity.

But it’s not readily apparent that prisons are a dominant industry when you wander the streets of Florence. Public art abounds, as do antique stores and eateries, and there’s charm and personality to the spare. There’s a few galleries, and many local artists have booths in the stores, as well as a popular craft brewery.

Like its Italian namesake, Florence also has a prominent bell tower on the former First Baptist Church, now the Bell Tower Cultural Center and home of the Florence Arts Council.

Council President Peg Piltingrud says she has lived in town “off and on forever.” Before she bought a building downtown with a friend in 1994, Piltingrud says, “The 100 West block – which is considered the block to be in – had seven empty buildings.”

She turned one level into a painting studio and gallery, and her sister and sister-in-law opened an antique store. The thesis: “What can you sell that doesn’t compete with Walmart seven miles away? The answer is antiques and used stuff.”

The pendulum started swinging the other way. There were three antique stores back then; now there are more than 20. “There’s been consistently over 20 [antique shops] for 15 years now,” Piltingrud says.

The antique stores supported local artists by giving them display and retail space, and they also helped support restaurants. “If you didn’t have the antique stores, you wouldn’t have the restaurants,” Piltingrud says. “It’s just sort of a ball rolling, and then the artists can sell more of their products.” Today, she adds, Florence has an “artistic community” of painters, potters and blacksmiths.

The Bell Tower represented the snowball taking on a new scale. In 2013, the Florence Arts Council used it as a venue for a single show. The church had just seven members at the time, and they offered to give it to the council if they would take it over and maintain it. “It was a turnkey situation,” Piltingrud says. “Everything in there was given to us.”

After a good “mucking out,” the council took the building over and fixed it up, replacing the furnaces, planting a garden in the “weed patch” and otherwise fixing it up, Piltingrud says. It opened in October 2013 for the annual “Paint the Town” event.

It’s now Florence’s cultural hub, hosting regular gallery shows, classes, kids’ camps, concerts and other events. “Slowly but surely, we’re in the black with our finances,” Piltingrud says. That keeps the aforementioned ball rolling: “Ten percent of anything we make goes into a public art fund.” 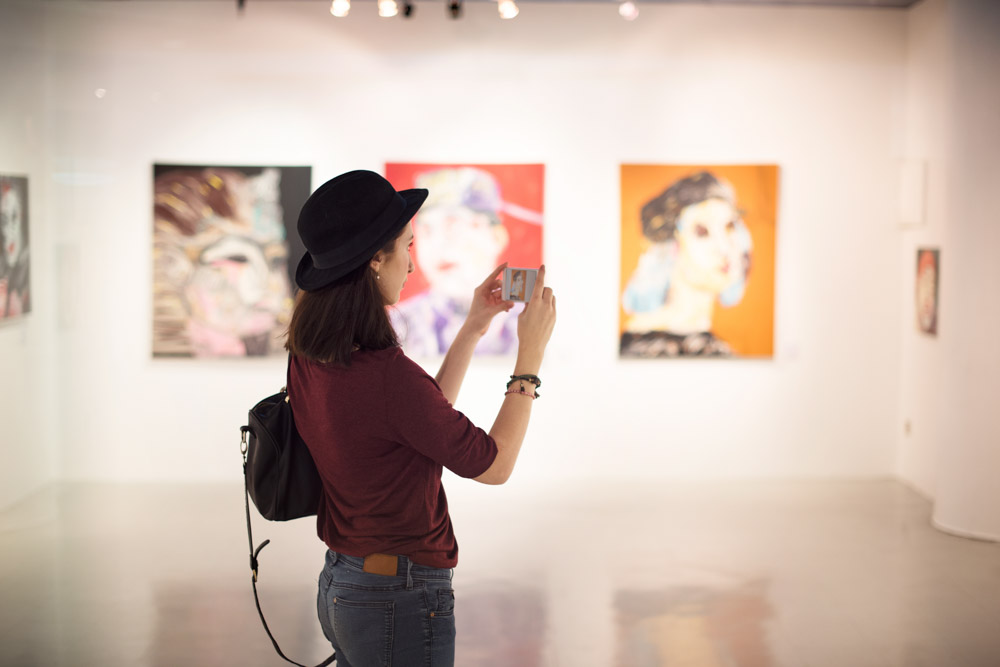 Many local artists have been paid to participate in the program, which funded artworks large and small all over Florence, with several projects currently in the works or on the drawing board. One will use a cement bridge next to the Bell Tower (funded by the Works Progress Administration during the Great Depression) as its canvas. “We’re going to do a Gaudi-type tile project on that, as soon as the city figures out who owns the wall,” Piltingrud laughs.

The commitment to art evokes a comparison. “Florence has the same weather as Santa Fe,” she notes. “If you look around, it’s juniper trees and mesas, just like Santa Fe. Santa Fe is 300 miles south, as the crow flies, and 2,000 feet higher. That’s the difference – 2,000 feet and 300 miles – so it’s basically the same climate.”

Word is getting out. “Florence now has three Realtors,” Piltingrud says. “We only had one for many, many years.”

Case in point: Denver-based Unbridled Holdings bought Florence’s old middle school in May 2019 with plans to redevelop it into a multi-tenant facility that could be a catalyst for local jobs. “It’ll be a showplace,” Piltingrud says.

Another transplant from the Front Range, Hans Prahl, opened Florence Brewing Company in 2016 and has won over scores of local Coors drinkers in the time since.

Prahl, who moved from Colorado Springs to launch the brewery, fell in love with Florence at first sight. “As soon as I got down here I was like, ‘Wow, this town has so much potential,'” he says. “‘This just feels like it needs a brewery.'”

He commends the city government, noting, “They want to work with businesses because they see the potential. Instead of saying, ‘No, you can’t do this,’ they say, ‘What do you want to do and how can we help you?'”

Employees of Supermax and other nearby prisons have gravitated to living in Florence, after often commuting from Pueblo, Prahl adds, and he says the town has a “large LGBTQ presence” and a notably diverse population of about 4,000 people.

“Everybody brings that small piece of who they are into Florence,” he says. “I’ve been to 28 countries. Every place has its own unique feel, but I’ve never really felt a place like Florence before.”

Add the “culture of people embracing difference and embracing each other” to easy access to the Arkansas River and hiking trails and you get a second comparison from Prahl that’s not Santa Fe. “I think this has the potential to be a new Boulder,” he says. “I really do.”