Designed by Denver-based Fentress Architects, DEN is recognized worldwide for its iconic peaked roof inspired by the Rocky Mountains.

As one of the most prestigious honors in Colorado’s built environment, the award is presented annually to a project that has “significantly influenced design and lifestyle in Colorado” and features a “timeless and enduring design that has created a sense of place” for at least 25 years.

“Our vision for DEN’s Passenger Terminal was to create a memorable design – a gateway to Colorado and the West,” said Curtis Fentress, FAIA, RIBA, Principal in Charge of Design at Fentress Architects. “Twenty-five years later, the design continues to transcend time and is known around the world. I would like to thank AIA Colorado Honor Awards Jury, the entire project team, and my former partner Jim Bradburn.”

Founded by Curtis Fentress in 1980, the firm has designed $43 billion of architectural projects worldwide, visited by more than 650 million people each year. The firm has been honored with more than 550 distinctions for design excellence and innovation. 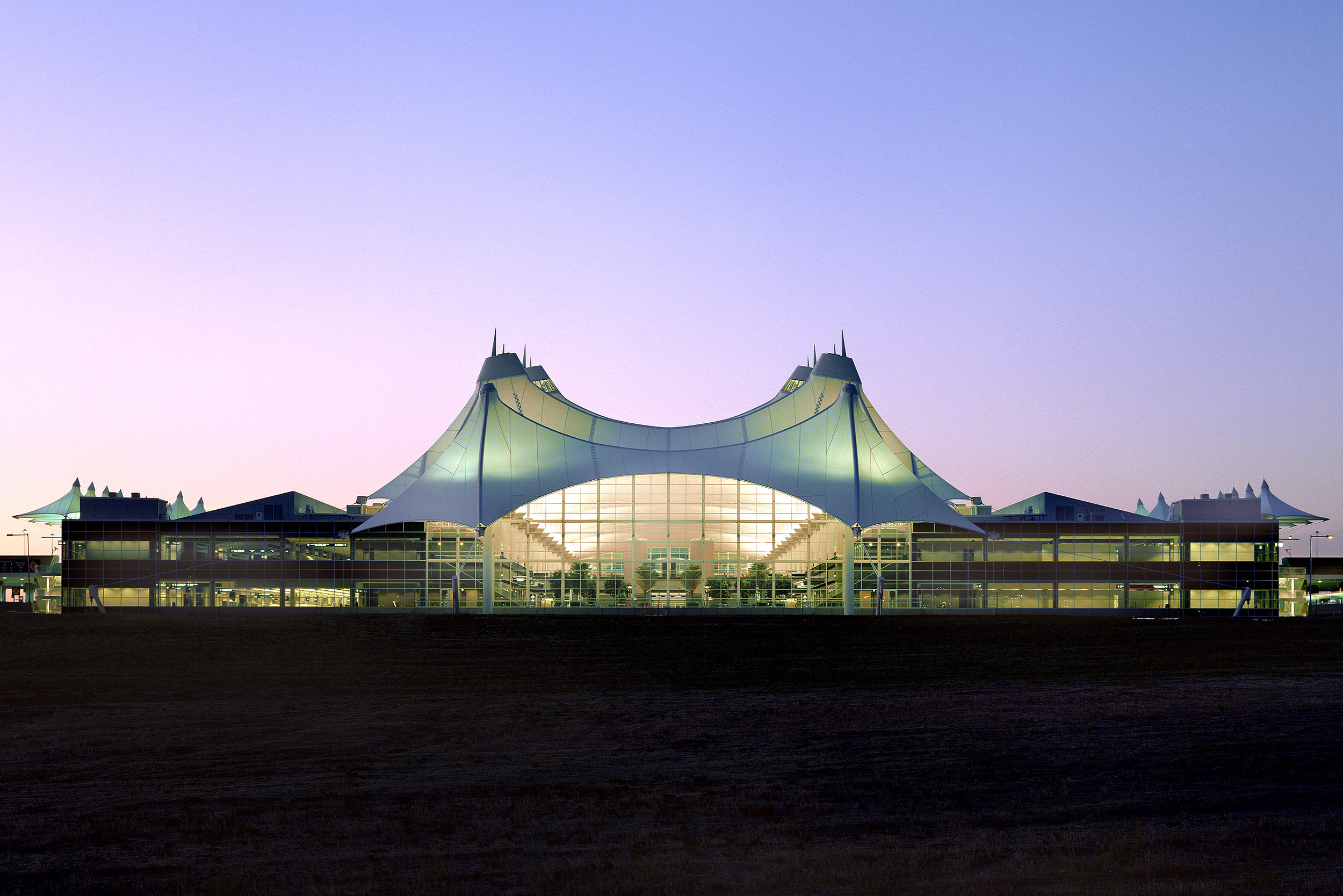 Completed in 1995, Fentress’ design for DEN’s Jeppesen Terminal stimulated a paradigm shift in the way architects and the public perceive airport design. Previously, airports were conceived as ‘people processors’ – nondescript warehouses comprised of low ceilings and dim lighting. Fentress sought to change this notion by creating an airport that serves as a symbol of Denver and a gateway welcoming all to Colorado and the West; architecture as memorable as it was functional.

“Few projects have been as iconic or as meaningful to a city as the Denver International Airport,” said the 2020 Honor Awards Jury at the AIA Colorado Design and Honor Awards Ceremony on August 17. “This project is known nationally and internationally and has beautifully withstood the test of time. This project is a no-brainer for a Twenty-five Year Award. Its timeless design has become an architectural icon for the City of Denver.”

To create a significant airport, the terminal’s design embodies forms and materials native to the Rocky Mountain region. Peaked roof forms rise 130 to 150 feet, evoking a sense that one has stepped onto the snowcapped mountains that inspired the architecture. The context-driven design signified the first time an airport became a timeless icon of a region through expressive forms and has inspired the architecture of hundreds of airports worldwide.

DEN’s design set a new standard in innovation. With a deadline of only three weeks to create a new terminal concept, the design team reimagined the terminal archetype by relocating the building’s mechanical system from the roof to underground and designed the world’s largest structurally integrated, Teflon-coated tensile-membrane roof at the time of completion.

“At the time we designed the terminal, we took many risks,” said Curtis Fentress. “A lot of creative decisions we made had not been done before on such a massive scale. To all the young architects, don’t be afraid to push the limits to create great architecture.”

As one of the world’s largest daylit structures, DEN’s design showcases the first time permanent skylights were integrated into a roof form with tensile membrane fabric. Skylights atop the eight tallest masts reach up to 150 feet, allowing sunlight into the building to enliven the space. To fasten the roof’s fabric to the glass building structure, the design team developed the first “sausage connection” – a pliable two-foot diameter vinyl tubular section – which allows the structure to safely move up to 30 inches during dynamic roof movement without affecting the glass walls. 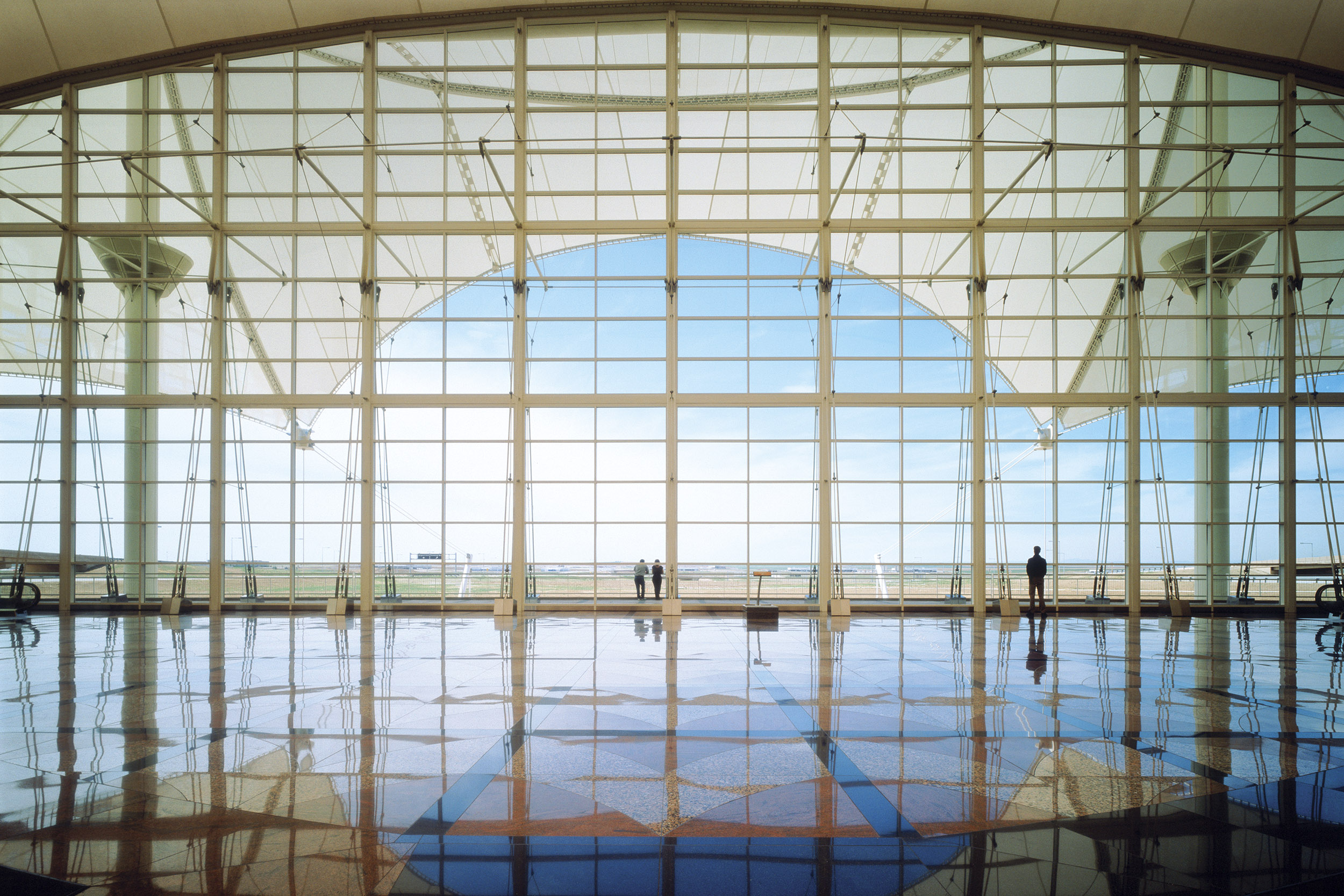 Design that Stands the Test of Time

Over the last 25 years, DEN’s Jeppesen Terminal has inspired the region’s built environment, establishing a precedent for architecture to create a sense of place while providing a sustainable and enduring commitment to both Coloradans and visitors. Today, the terminal continues to stand as a memorable gateway to the West and an enduring symbol of Colorado’s Rocky Mountains.

The airport is consistently voted as one of the most efficient and significant airports worldwide, including its ranking as one of the “Best Airports in 2020” by Skytrax World Airport Awards and the “Best of the Biggest U.S. Airports” by Wall Street Journal in 2018.