Plus, how breweries across the state are reopening and serving the community

Among the many industries that call Colorado home, micro and craft breweries comprise one of the largest. The state boasts over 420 breweries with an economic impact reaching over $3.3 billion, making Colorado’s beer industry the first in the country in terms of economic impact per capita. Hit hard by the sweeping coronavirus pandemic, Colorado breweries, particularly those in rural counties such as Mesa County, are now facing a difficult rebound as they begin to re-open.

The impact on Mesa County breweries

Mesa County was one of the first to begin preparations for reopening businesses in late-April. However, breweries, wineries and distilleries were excluded from its initial public health variance, approved on April 28, which enabled certain businesses, based on license type, to re-open. While the country has since allowed breweries to reopen under a new variance, approved on May 22, brewery to-go sales plummeted nearly 50% during the three-week period they were excluded. This was on top of the decrease in sales during March and April.  Now, the county’s breweries are beginning the process of reopening and recovering from the challenges of the past few months. 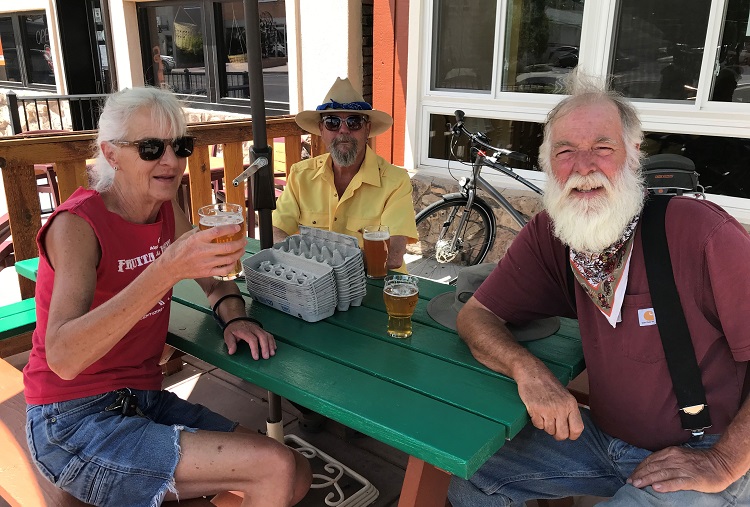 Copper Club Brewing Co. in Fruita, even though they were already positioned for to-go, takeout and delivery sales, has struggled through the past months. “Most businesses in Downtown Fruita are really hurting because spring is one of our main tourist seasons due to our world class mountain biking trails,” says Michele Collins, owner and founder of Copper Club Brewing. “Our sales plummeted 60% from March 17 through April. Then, once the restaurants opened in May, sales dropped more, about 75% from usual.”

Monumental Beer Works, a new brewery in Grand Junction faced its own set of challenges. The brewery was scheduled to have its grand opening March 19, two days after the state’s stay-at-home went into effect. “As a brand-new brewery, COVID-19 had a huge impact on our opening,” says Brian Fischer, co-owner of Monumental Beer Works. The brewery had to lay off its staff before their first shifts, build and implement a to-go distribution model, and buy cans, growlers and supplies to meet the to-go demand.

Now, as the variance allows the two businesses to re-open, the brewery owners face new challenges in adjusting to the new normal.

Being able to open at 50% capacity under the new variance has helped tremendously, Collins says. However, the excitement of reopening and making money comes with a fear of getting overwhelmed by tourists. “The Mesa County COVID-19 numbers have stayed low and we take this very seriously, so we want to keep things mellow,” she says. “I would rather have folks wait to visit once this blows over so Mesa County can keep our infection numbers low and to keep our recreation areas protected.”

“We were able to open last Saturday and it has been fantastic,” Fischer says. “We’re excited to finally be able to share our space with the community and get some financial stability. The fact that we were excluded [from the April 28 variance] was pretty horrifying. I want to make sure that people are aware of the risks that breweries, manufacturers, have had to go through and to make sure that our voices are heard.” Currently, Fischer and his staff are figuring out how to manage its capacity with the indoor and outdoor space that Monumental has.

In other areas of the state, all breweries are beginning to re-open. “We wanted to make sure that the guidelines were license neutral to allow for all businesses (including breweries) to reopen when it was safe,” says Shawnee Adelson, executive director of the Colorado Brewers Guild (CBG). “We saw in Mesa County the impact of basing the reopening on license type.”

And the new Colorado Department of Public Health and Environment guidelines do allow for this. Under the recently released guidelines for restaurants and food services, breweries are able to reopen as long as they adhere to the guidelines and “ensure access to food for on-premise consumption.” According to Adelson, breweries can leverage their existing relationships with food trucks and neighboring restaurants to meet these new rules.

As the breweries reopen, CBG is reminding Coloradans of the importance of our beer industry to the state’s communities. CBG and the Left Hand Brewing Foundation recently announced the Colorado Strong Pale Ale, a benefit beer made with Colorado ingredients and brewed by a number of local, independent breweries. 20% of the sales made from the beer will be donated to the Colorado Strong Fund, which provides assistance to healthcare, hospitality, service industry and gig economy workers across the state.