Made in Colorado, a medley of the locally made for the greater good, meet: Opopop popcorn, out of Englewood.

The company “wraps” kernels with seven different flavors (including Fancy Butter, Chedapeño and Cinnalicious) at its facility in Englewood.

Serial entrepreneurs and DJs Jonas Tempel and Brad Roulier have followed up success with Beatport with a move into a totally different industry than music samples and beats for DJs.

“Nobody has done anything cool in popcorn,” Opopop President Sarah McDowell says. “Neither of them [Tempel and Roulier] had any experience in the food industry, but they knew how to build brands and challenge the status quo.” 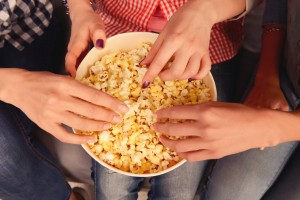 The company “wraps” kernels with seven different flavors (including Fancy Butter, Chedapeño and Cinnalicious) at its facility in Englewood.

“Self-manufacturing as a startup is no joke,” McDowell laughs. “We use a similar technique to candy-wrapped almonds or candy-wrapped M&Ms where the kernels tumble in flavoring and what comes out are these perfectly enrobed raw kernels.”

Opopop sells its popcorn in a starter kit with a silicon popping bowl as well as refills. Coming soon: peel-and-pour popcorn cups.

Peterson has also recently written about backpacking in Yosemite, cross-country skiing in Yellowstone and downhill skiing in Colorado for such publications as Denver’s Westword and The New York Daily News. He can be reached at Eptcb126@msn.com