Some misconceptions about gold

Conventional wisdom says that stocks are vulnerable to the ravages of inflation, while gold is one of the best hedges. But the data show otherwise.

Conventional wisdom says that stocks are vulnerable to the ravages of inflation, while gold is one of the best hedges. But the data show otherwise; compared to gold, stocks provide superior protection against inflation over time.

In times of heightened uncertainty and/or volatility, should you rebalance your portfolio to include gold as a hedge? No. As a general matter of portfolio construction, should you invest directly in gold or other commodities? Also no.

So, is there any case to be made for gold as a financial asset? Well, it is the ultimate international currency. Since the metal is near-universally exchangeable and easy to hide away or carry across borders, it’s been the last word in insurance against the collapse of states for millennia. Gold is also unrivaled as a store of value. But it does not offer the same level of returns over time as equities.

Owning gold jewelry is a form of “consumption dividend”

Gold is beautiful, it doesn’t fade or tarnish, and it lasts forever. Consequently, it’s been used in jewelry for thousands of years. Professors Ken French and Eugene Fama make the case that since much of the global stock of gold is in the form of jewelry and other goods that pay a “consumption dividend,” the “dividend increases the current price of gold and lowers its expected capital gain return.” They further argue that an investor holding gold as a portfolio asset should only expect to receive the capital gain.

The case against owning gold as a portfolio asset

Many investors believe gold should be included as an essential part of a diversified portfolio strategy. Let’s examine the evidence from the perspective of a U.S. investor.

From the founding of America until Aug. 15, 1971, the United States was on some type of metallic monetary standard. Then, President Richard Nixon announced the suspension of the Treasury’s standing offer to foreign governments to exchange dollars for gold, or vice versa, at the unvarying rate of $35 an ounce. From 1971 to 1974, it was illegal for U.S. investors to own gold directly.

To see how gold performs as an investment over time, we calculated annualized compound returns and standard deviations (i.e., volatility) for the period from January 1975 to December 2019. As the left chart shows, gold returns for this time frame were only 4.8%, with a volatility of 18.7%. Over the same period, global equities, as measured by the MSCI World Index, returned 10.2%, with a volatility of 14.5%. Meanwhile, the inflation rate, as measured by the U.S. Consumer Price Index, was 3.6%. In other words, gold returns edged out inflation by just a little over a percentage point annually, while equities did much better.

In deference to gold bulls who prefer to begin with a $35 starting price (to match the price before 1971), we similarly analyzed the period from January 1970 to December 2019. With this earlier starting point, gold returned 7.8% annually with a volatility of 19.2%, but equities gained 8.8% with a volatility of only 14.6%. Inflation was 3.9% during this period. 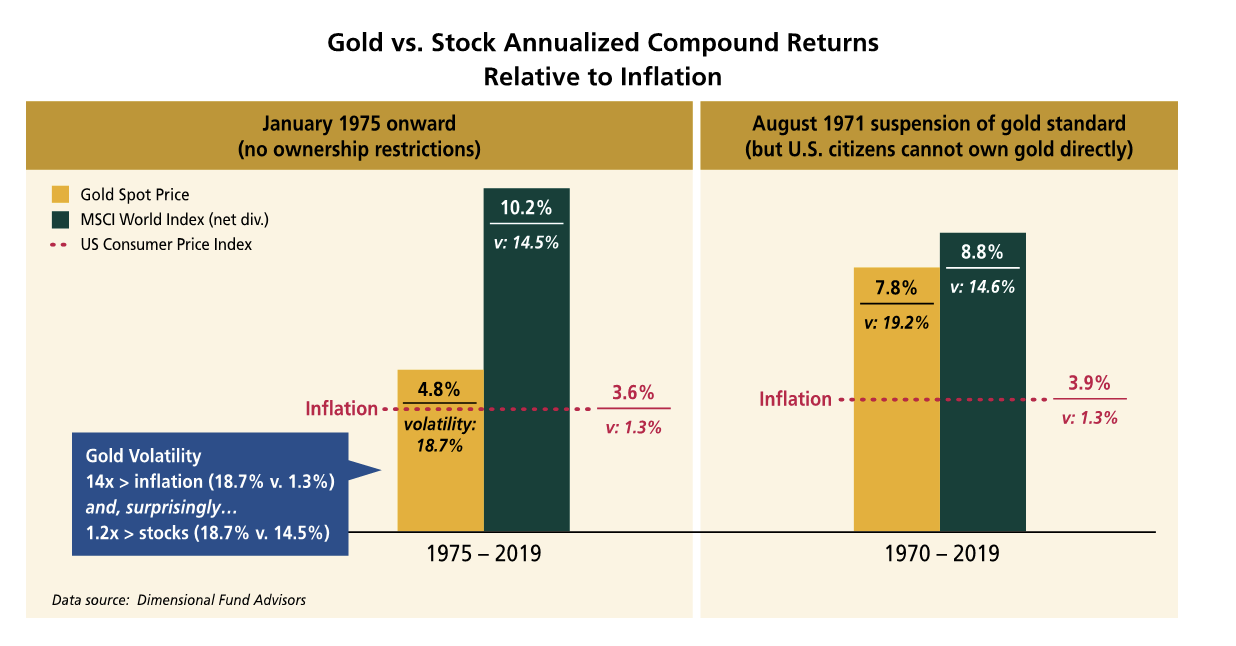 Either way you look at it, equities have historically been far superior to gold as a hedge against inflation—and, surprisingly, less volatile.

In both of the previous analyses, the volatility of inflation was 1.3%. With a volatility of 18.7% and 19.2% for the later and earlier starting dates, respectively, gold was more than 14x more volatile than inflation in both periods.

Unlike stocks (including those of mining companies) that produce earnings and pay dividends—and bonds that pay interest—gold is a speculative commodity. It can’t be valued by discounting a stream of future cash flows. As with all commodities, its only source of return is potential price appreciation as a result of the fluctuating forces of demand and supply. If you put physical bullion in a vault and wait a few decades, it produces no income, but you will incur the carrying costs of storage and insurance. When you decide to take your gold out of the vault, its value will be determined by the current spot market price.

In contrast, a stock reflects ownership in a business enterprise that seeks to generate profits and produce more wealth. Also, and perhaps counterintuitively, corporate earnings grow faster when inflation is higher and more slowly when inflation is lower, according to research from Professor Richard Warr of the University of North Carolina.1