Executive Wheels: While the Toyota RAV4 lineup includes 10 cars, all the company needs to make is these hybrids

I don’t suppose I am any different than any other regular person in this pandemic – except, of course, those brave essential health care workers and others working in supermarkets and delivering mail; they’re special – but as an automobile reviewer I actually have to drive the car.

And drive I did. During this time, I was lucky to have the 2020 Toyota RAV4 Hybrid. I simply wanted to drive, so I made up places to drive to. I drove around. I imagined it was the real world and that there was no traffic and I had the open road to myself. Actually, that last bit wasn’t my imagination; being in the RAV4 Hybrid without the cumbersome annoyance of traffic was an added bonus.

To say that I liked the RAV4 Hybrid would be a gross understatement. I loved it. I very much wanted one for my own.

RAV4 stands for “Recreational Activity Vehicle, 4-wheel-drive,” although in truth you can buy a RAV4 with just front-wheel-drive. My test-drive Hybrid model was an all-wheel-drive model but since I had it in the first week of May I didn’t have any need for the feature. I would, however, buy one of these in AWD because I believe it is the safest of features for any vehicle.

I’ve already stated unequivocally that I loved this vehicle, but Toyota here has made what I believe to be the ultimate error in creating its RAV4 lineup: there are way too many trims, 10 in all. The LE, the XLE, the Premium, the Adventure, the TRD Off-Road, the Limited, and then a few hybrids of those trims thrown in for good measure. The gasoline versions, in each trim level, feature the same engine: a 2.5-liter 4 banger with 203 horsepower, while in the Hybrid versions they add in a multi-electric motor assist power output that boosts the horsepower to a combined 219 hp. Since the engine is the same in all of the trims, the only real difference – aside from the Adventure trim that gets more aggressive styling, and the TRD trim that adds in a beefed up suspension and badging – is that each succeeding more-expensive model carries more extras as standards.

It just adds expense. And, presumably, you can just add on the stuff yourself in any model. And besides, what they ought to sell is just this Hybrid, because this is an impressive vehicle.

The first thing that struck me was the size. Since this vehicle debuted in the Toyota North America in1995 as a compact crossover SUV, it has grown through the generations. Now, in its fifth generation, the wheelbase is 105.90 inches, and you could hardly call this vehicle compact. Indeed, its bigger brother, the Toyota Highlander, debuted in the 2001 with a wheelbase of 106.9” and now it’s a whopping 112.2”. So basically, the 2020 RAV4 is the old Highlander. 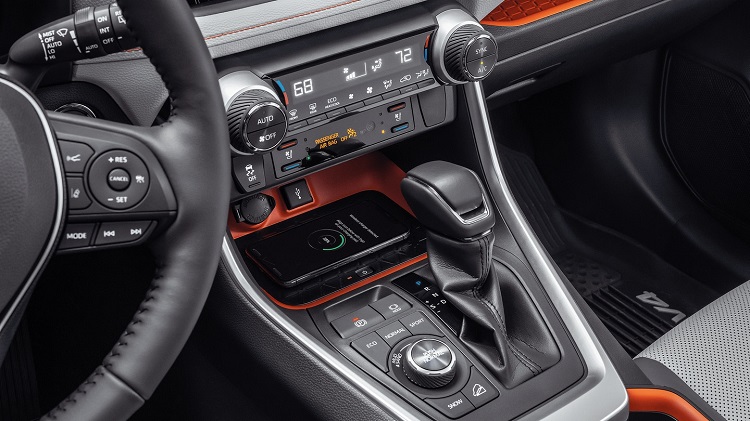 The next thing that struck me about this RAV4 was how beautiful it is. They call the color of my test-drive model blueprint/midnight blue, and it featured color-to-match wheels, so with the overall great styling and great color this is an impressive vehicle to look at. Then inside, it had black leather upholstery, the seats and leather-like door panels and dash featured blue stitching. I, and anyone else who rode in it, loved it.

Then it was so intuitively designed that everything – and this car had everything – was so easy to operate that a person with no tech skills whatsoever could hop in and drive away with confidence. Plus, I liked the hands-free, put-your-foot-up opening of the rear liftgate that makes storing gear so simple.

I saved the best for last: the driving.  As I mentioned, this hybrid package puts out a combined 219 hp, while getting an estimated 41 mpg city/38 mpg highway/40 mpg combined fuel economy, which is more than impressive. And it achieves this without any lack of power – on the contrary, like many hybrids, this car feels more powerful and is very fast in the city and is quite the powerhouse on the highway and on mountain roads. About the only negative I encountered was that I noticed a little extra road noise on I-70 and I-25 when I was going 65 mph; not a deal killer, but I have been in cars that are more quiet.

Like I said, this vehicle had every safety and modern electronic gadget that people expect these days. And Toyota is really pushing its Toyota Safety Sense 2.0 that features a pre-collision system with pedestrian detection, lane departure alert with steering assist, automatic high beams, dynamic radar cruise control, lane tracing assist and road sign assist. I’m a big fan of safety, and I liked this system here in the RAV4 because it was unobtrusive; it worked but didn’t beep at me all the time.

However, it can use the self-driving  too much at times: the Lane Tracing, for instance, when the dynamic radar cruise control is on, “uses the lines on the road and preceding vehicles to help keep the vehicle centered and in its lane.” In other words, it’ll steer just a little for you. The road sign assist detects road signs – speed limit signs, stop signs, do not enter signs, yield signs, etc. – and displays them in the dash. Both of these features strike me as nanny-ish; I’d rather the driver control the car and see the actual signs rather than the facsimile in the dash.

Having said that, I loved driving the RAV4 Hybrid. It was very easy to drive, with handling as good as it gets in an SUV, had a powerful engine with wonderful gas mileage and was a nice size. What’s not to like? I would own one of these in a heartbeat.