The wife-and-husband duo of Knight and Sabharwal met working together at LinkedIn in the Bay Area. “We really liked working with each other and were hoping to find another opportunity to do that,” says Sabharwal, 37. “I never would have thought it would be regulatory compliance software for the insurance industry.”

Knight, 36, concurs: “We worked together at LinkedIn, building things, and I never expected this would be the thing we built together, but it was a fun moment as we realized we had something we could probably make an impact with.”

But that’s what they did when they started AgentSync in California in 2018, then moved to Colorado with their startup in 2020. “It was a fantastic transition for us,” Knight says.

The company has scaled from three people to about 100 at its Denver office (and 130 total) in 2021 as it landed $100 million in VC investments since moving the HQ. Knight and Sabharwal forecast 2X growth in 2022 while hiring at least another 100 employees. Four new products — including “a pretty big, game-changing one,” Sabharwal says — are also on the calendar.

Another big event for the founders: They welcomed a baby to the family in late 2020. “I can’t even imagine doing that in San Francisco or really any other bigger city,” Sabharwal says. “The work/life balance here is exactly what we were shooting for.”

They live and work in Denver’s Five Points neighborhood, and the commute is six minutes by foot. “Being able to walk our daughter to school is not something we ever would be able to do — and that’s been pretty miraculous,” Knight says.

Any advice for aspiring entrepreneurs? Be patient and persistent. “The first year is always really hard and really lonely,” Knight says. “When you get through the first year, you start to get traction, things start to change, and things go forward.” 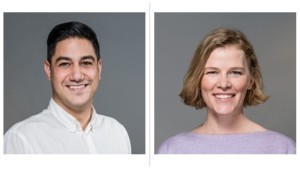 AgentSync
AgentSync’s mission is to create efficiency for the nation’s insurance industry – one more step forward among many in lowering insurance costs in the U.S.